April 29, 2014
To celebrate the finish of "The 66 Kid" Kathy and I joined our neighbors Cal and Jon for a respite in Rocky Point, about a four hour drive from Cave Creek. Stayed at a hotel on the beach:

Room with a view: This is room #439 at the Penasco Del Sol Hotel, in Rocky Point, Mexico

Behind my three party hardy travelers is Sandy Beach where I once camped out with the Ds and Terry Townsend in 1974 and neither the hotel nor any of the condos or buildings out there existed. Someone, I think it was me, predicted that someday the entire beach would be covered with hotels, a la Waikiki. Well, here it is 40 years later and at least half that came true.

We also partied at a legendary cantina in Cholla Bay: 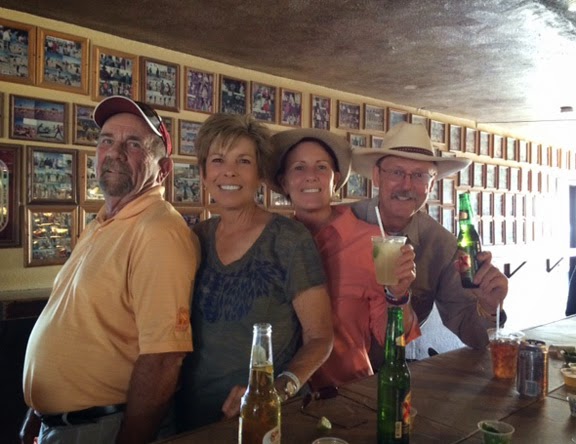 Meanwhile, We are doing The 50 Best Gunfighter Photos for the next issue of True West. In the Time Life series (1970s) they ran a photograph, which is credited to Roscoe Willson (yes, with two lls) on pages 166-67:

It purports to show an actual gunfight, in progress, near Quartszite in about 1904. We can clearly see the first gunfighter, at left, and his clothing appears to be accurate for the time period. The other participant is half hiding at the fence corner and an eye witness is at right. Photo credit in back of book says, "—Roscoe G. Willson Collection, courtesy American Heritage Publishing Co. Inc., New York"

What we want to know is: Could this be the Roscoe Willson who wrote for the Arizona Republic back in the fifties and sixties? And do we know where his collection ended up? And more specifically, who owns this photo today? Gay, consider yourself on assignment.

"Fiction departs from the truth to intensify it."
—Adam "Flippin" Gopnik, in the New Yorker
Posted by Bob Boze Bell at 11:25 AM