October 11, 2014
It's been an incredible experience and it's coming to an end today. Here are some of the highlights of my artist in residency in Lincoln, New Mexico for the past ten days:


BBB, Gary Cozzens and the park rangers listen to Frederick Nolan (left) go over his proposed historian in residence article. This is in the Gallegos House where I had my office. Yes, that is the two foot bronze of "Billy the Kid" which I produced with Bronzesmith in Prescott Valley.

When I got the news that my best friend Charlie Waters was fading fast, I took my leave on Tuesday morning and drove to Albuquerque, where I hopped on a Southwest flight and flew to Las Vegas to see Charlie one last time. It was very touching and yet brutal (he was in so much pain, when I heard he had passed late the next day I was actually relieved and happy for him). I then hopped on a return flight to New Mexico, ran to my car and drove straight through to Lincoln without stopping in order to make it back to a speech I had in the old Lincoln church.


The packed church in Lincoln, New Mexico as I'm being introduced by Gary Cozzens.

I stayed at the Ellis Store which is a B&B. There I met this gentleman who is writing a book on Jimmy Dolan and Murphy. We think of them as being evil because they are in opposition to the Kid and his faction of McSween-Tunstall, but, as you might guess there are some new things to be learned about both men. As a tease, I learned that Jimmy was five foot two and he was in Sherman's March to the sea campaign, which must have steeled him for his encounters in New Mexico

While in Lincoln I got to visit Nora Henn's vast library which is being catalogued in her home outside town. In the main library is this photo:

Nora and Walter Henn in their younger days. Both were quite influential in my research of the Kid. And when I was in Lincoln in the early nineties I spent some time at their house talking about all things Billy. It was Nora who told me after my first edition of Billy the Kid came out in 1992, that it's not right to make jokes about history and not let the reader in on the joke. She was right. I totally redid the book and the second version of the Kid, published in 1996, is more friendly to history.Thanks Nora!

Last Sunday night we had a wonderful dinner for 20 in the Ellis Store dining room. Although it is dark, you can get a taste of the evening with this photo shot with natural light:

Buckeye Blake was in rare form, arriving with another hanged man, created by artist Dave Powell. 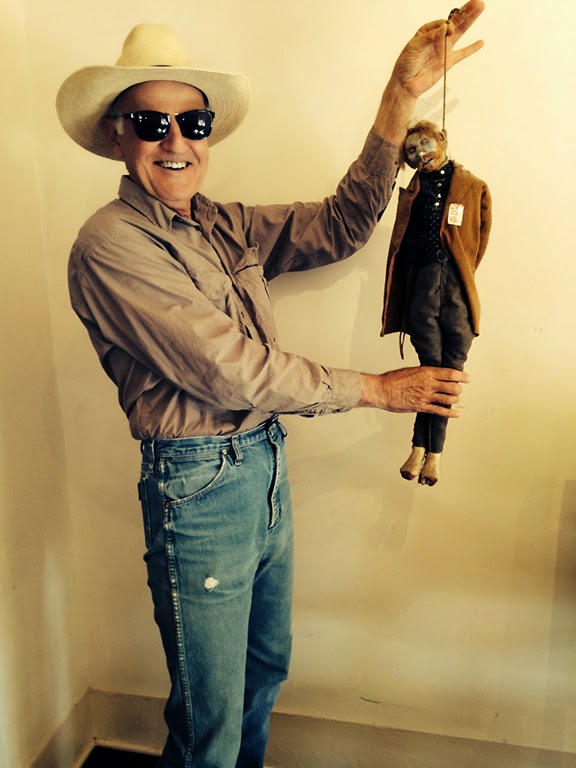 Buckeye was irritated because I didn't bring the other hanged man that hangs in my office in Cave Creek. Perhaps that explains some of the bite in the following comment.

"Nobody reads your blog."
—Buckeye giving me grief at the Wortley
Posted by Bob Boze Bell at 6:42 AM