Got up this morning and whipped out a couple studies, including these two (on one board):

This is part of my new effort to ruin five boards a day. I have piles and piles of patina boards where I have experimented with different washes and they stack up and I don't know quite what to do with them. I finally decided I would make a stack of patina washes that were weak or problematic and I would go out of my way to do something bold, because it's already a dog. This is a typical board:

Interesting, but what the hell do I do with it?

Dan Harshberger and I are hard at work on The 66 Kid project. Here's an aspect of 66 culture we want to capture. If you were ever a night man, we want your experiences.

The Night Man
After Memorial Day many service stations along Route 66 would stay open 24-hours. Summer vacation students or seasonal "Nightmen" would be hired to work the overnight shift. They were usually loners and laconic types. Allen Bell's favorite night man was a guy named Scotty. The 66 Kid never knew his last name. Scotty was meticulous, friendly, but rather shy. He lived alone in an apartment and walked to work at the gas station.

Out on the road, the traffic was lighter than in the daytime and many cross country travelers preferred driving at night when it was cooler, especially across the desert. Business was light but steady until the wee hours, when a good night shift man would use the down time to clean the restrooms and the driveway. One temporary night man, Dan The Man Harshberger, describes how he filled the time:

"It was busy until around ten and then my good friend—Box-Lip Darrel—would stop by and we'd raid the pop machine since I had the keys, and drink a couple of orange sodas. And I'd pump a couple of free gallons of gas in his '50 Shoebox Ford. We gave a discount to local people, I'm guessing 10 cents per gallon. We had to write down the discount on a piece of paper kept by the cash register. So I'd make up some discounts equal to how much gas I put into Darrel's car, so it all came out even. About 11:30 every nite I had to wash down the drives by the pumps. I would squirt some high-octane onto the concrete and using a push broom scrub the drives. It worked great and cleaned all the oil leaks off. Then I'd mix in some Tide and water to modify the gas, then hose everything into the gutter on the highway. The only thing that scared the shit out of me, was when someone would pull onto the drive when it was full of raw gas and they'd get out of their car smoking a cig. Lucky for me and them the gas never caught fire."

"I remember one nite, I was ready to close up, probably about 11:45, and car pulled in with his windshield an inch thick with smashed grasshoppers. He didn't want gas, just his windshield cleaned. I started scrubbing it and by the time I was done I had about 10 more cars lined up with windshields covered in grasshoppers, I ran over to turn off the lights to show we were closed, but I was there till 12:30 scrubbing windshields. And nobody bought any gas—they said the price was too high, they went on down the highway, as if they would find gas in Kingman any cheaper. Ha!"
__________
One of my favorite moments in "American Graffiti" is when the hotrodder, John Mills, pulls in a gas station before the big race and while he's talking to the mechanic a couple kids are throwing rocks and "playing grab ass," as my dad used to put it. Just a classic moment of getting it right with gas station behavior. 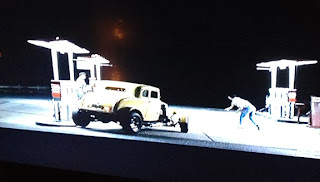 "What do'ya got in this gas—GOLD?!"
—Every customer we ever waited on in Kingman