July 1, 2010
Yesterday, Robert Ray and I drove to Prescott Valley to scan some of the best rodeo programs I have ever seen. Charlie Carpenter has been collecting them all his life and he has virtually the entire history of rodeo in his home. I met him on the set of "Queens of Country" the movie that filmed in Cave Creek two months ago. I'll post a few images later to give you a sneak peek.

Teenagers Ruin Everything
I was walking with Peaches this morning (waited too late, it was already too hot at 7, need to go earlier) and ran into my neighbor Mike Barro (of Barro's Pizza fame) out feeding his horses and I asked him why he stopped doing his Fourth of July hot dog get together every year. The whole neighborhood attended and after burgers and dogs everyone sat out on the Barro's big lawn and watched the Cave Creek fireworks. It was a ton of fun and we all got to catch up on the neighborhood families. Mike said certain teenagers ruined it by drinking, and I assume, although I can't prove it, that the teenagers in question were his own.

I told him I feel his pain. Every summer we used to go to Mission Beach in San Diego, until our first teenager (that would be the girl) begged us to let her go to a party two houses down, on the boardwalk. We sat outside, closest to the wall nearest the party (it was probably fifty feet away) to keep tabs on her and a friend, but sure enough the "guys" who were renting the beach house put beer— or was it vodka?—in the girl's empty coke cans and they got trashed right under our noses. That ruined San Diego for us and we didn't go back for about six years and even then, when we did try it again the bitter taste of the incident killed our desire to go. We've never been back.

The Face of The Old Vaquero?
I've been using the title "Old Vaquero Saying" for about 18 years now and have thought for some time it would make a very cool booklet, or at the very least, a T-shirt design. This morning, I finally did a sketch of a face to go with that title: 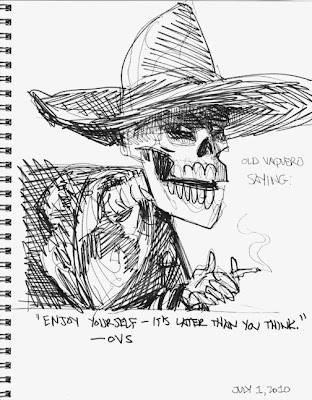 From this I started a scratchboard and here is the first pass: 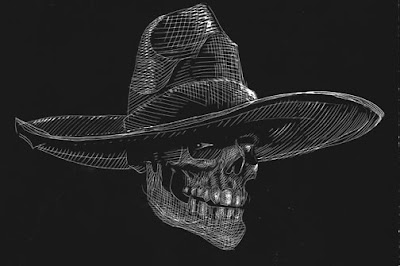 I wanted him to be a little demonic, or Posada-ish, and I think I got it. No?

"History is a cruel trick, played on the dead by the living."
—The very first Old Vaquero Saying I ever used in 1991, when I had the quote but couldn't find out who said it. This was, of course, long before Google. I used it in one of my first first Old West books and finally, as the book was going to press I punted and said it was an Old Vaquero Saying. I have been collecting them and using the term ever since.
Posted by Bob Boze Bell at 9:53 AM