July 6, 2010
Working on a cinematic sequence of General Crook's Mexico expedition in May of 1883 to bring down Geronimo. Utilizing Dan Thrapp's magnificent book: "Al Sieber: Chief of Scouts." Crook needed an excuse to cross the border (sound familiar?) and a lightning raid by the Apache Chato provided that (he and 26 warriors came across the border into the U.S. travelled 400 miles and killed 26 white-eyes in six days and went back to Mexico). Crook also needed a guide (one of Chato's warriors made a side trip to San Carlos to visit relatives and was captured. His name was Peaches and he volunteered to take Crook to Geronimo's strongholds). Crook's punitive expedition left Benson on April 23 and marched to the border, near Guadalupe Pass. Then on May 1, General Crook crossed into Mexico with three captains, three Lieutenants and 42 enlisted men, a surgeon and one striker, all following 193 In-dins: Chiricahua, White Mountain Apaches, Yuma and Mojaves led by Al Sieber. This force was followed by a massive mule train of supplies. Oh, and Mickey Free. As they climbed into the Sierra Madres they lost four mules in one day and five on another, as the overloaded animals tumbled into the abyss. Three broke their necks, and two had to be shot.

Nasty stuff. Sounds just like Afghanistan, doesn't it? And, by the way, while everyone talks about Afghanistan surpassing Vietnam as our longest war, the Apache conflict lasted for more than 20 years

Had a very nice, quiet Fourth. Stayed home and worked on artwork, like this piece: 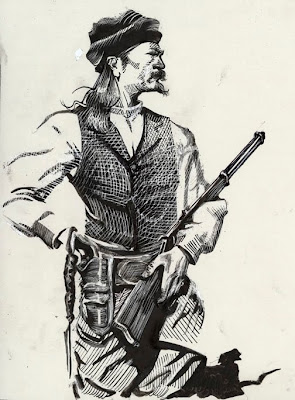 Russian Bill Swings In Shakespeare, New Mexico, November 9, 1881, for being "a damned nuisance."

Yes, this is for a True West Moment that will run in the Arizona Republic.

Our production manager, Robert Ray, had a close call last weekend. He was fishing at Woods Canyon Lake up on the Mogollon Rim last Friday when he started cramping. He thought it was food poisoning and he finally decided he'd better drive home. He had to pull over several times from the pain and his wife Bea told me he "willed himself home." Went straight to the emergency room and doctors immediately operated taking out his appendix. He was very lucky.