July 2, 2010
Kathy is on assignment in another state for the entire month so I am baching it and have plenty of time to work on my painting skills. One of the little goals I set for myself is to shadow the masters: copy the design and technique of a particular painting I like, and try to learn what gives it power, but, at the same time try and make it my own.

Yesterday I was in Editor Meghan Saar's office talking about a couple submissions we have and while we were talking I noticed a new catalogue on her in box: The Coeur D'Alene Art Auction: Reno, Nevada—July 24, 2010. As we continued to decide the fate of a specific writer, I flipped through the book and landed on a Maynard Dixon painting I had never seen: Lone Rider, oil on board en grisaille ($10,000-$15,000). I asked Meghan if I could borrow the book and she said, "Yes, as long as I get it back in time to review it."

Last night, when I got home it was too hot in the house so I went out to the studio and did a small study of the Dixon clouds in the Lone Rider. Shadowing the technique, I got some very striking effects: 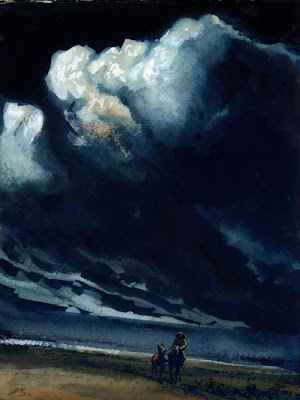 This morning, I changed the bottom and added the Apache Kid with a stolen horse traversing the flats east of Naco, Sonora on July 2, 1888. Not that I'm getting too specific, or anything. But you will notice that stolen horse is fighting the Kid a bit (happy accident).


"Failure really isn't terrible if you can say to yourself, 'Hey, I know I'm gonna be successful at what I want to do someday.' Failure doesn't become a big hangup then because it's only temporary."
—Jerry Della Femina
Posted by Bob Boze Bell at 10:50 AM