July 8, 2010
Working on a mashup of illustrations for the next batch of True West Moments. First up is Arlester "Dyke" Christian who was stranded in Phoenix in 1966 and recorded the song, "Funky Broadway-Part I" based on the social scene on Broadway Road. There is a grainy photo of him performing with the Blazers and I created this caricature from that: 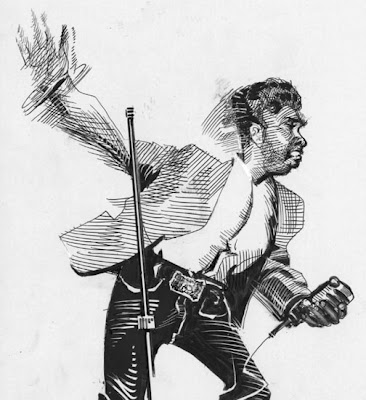 Next up, The Wizards of The Colorado: Jack Mellon and Mr. Issac Polhamus: 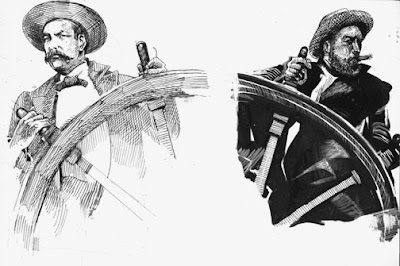 Went with two different styles. The cross hatching build-out with Mr. Mellon and the bold woodcut style with Mr. Polhamus. These two illustrations will go with different bits. Both guys could pilot a Colorado River steamboat up river loaded with tons of freight and make it through the dry spots as long as they had two inches of water! That's why they were known as "wizards."

"Adversity is another way to measure the greatness of individuals. I never had a crisis that didn't make me stronger."
—Lou Holtz
Posted by Bob Boze Bell at 11:26 AM