July 13, 2010
Here's a scene I have wanted to illustrate since 1989. I talk about it all the time in my speeches and this is what I say: "I wish we had a time machine and we could set it for Bonita, Arizona, July 1876. . .[sound effects of time machine taking off and heading over the Graham Mountains, and landing on the edge of the Camp Grant reservation.] As we walk into the Hotel de Luna dining room, I point out the kid in the kitchen washing dishes. Then I would ask the assembled people eating who they think is going to be remembered from this area a hundred years from now. I venture that someone will nominate General Wilcox since he's in the newspaper almost every day leading the U.S. Army after the Apaches. So, do we remember Mr. Wilcox? No? Five people at the Wilcox Historical Society remember Mr. Wilcox. Someone else would probably nominate William Zeckendorf, or Johnny Barnes. Do we remember them? And then I would say, Ladies and Gentleman, you see that buck-toothed bus boy in the kitchen? He's going to change his name to William Bonney and he's going to be remembered in a thousand books and 48 movies and none of you are going to be remembered.

Anyway, I have had great reference, shot out at Pioneer in the mid-nineties (and I used the photo in my Billy book) and I finally, this afternoon took a whack at it: 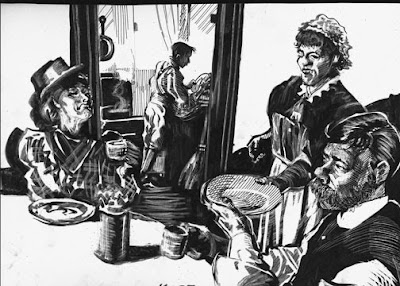 Not too shabby. Dig the muttonchops on the guy, went with an English maid outfit for the waitress (probably the cook as well) and the woman drinking tea is a tad pretentious but then, I suppose that is about right for the time and place.


"Henry was the only kid who ever worked there who never stole anything."
—Del Truesdale, operator of the Star Hotel in Silver City where Billy also washed dishes
Posted by Bob Boze Bell at 5:09 PM