September 2, 2013
Had breakfast yesterday morning at the new Santa Fe Bite and really enjoyed it. Great huevos rancheros. Took off for Arizona at about 11:30 and unfortunately we stopped at Old Town in Albuquerque for lunch at the Church Street Cafe and it was pretty bad. Frozen tamales and store bought chips.

Got on I-40 and shot out past Laguna pueblo (I've driving past here for 55 years and finally stopped to take a look around). Beyond Laguna we saw a wreck in the eastbound lanes. Looks like a travel trailer lost control and flipped on its side, blocking both lanes. 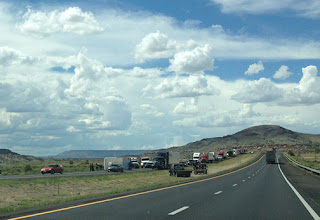 Stopped in Grants to visit Anna and Chase Bibo Hamilton. Great to see them. From there we cruised on to the Arizona line with surprisingly little traffic, except me and 10,000 trucks. Passed them all.

Big storm clouds to the south, towards Saint Johns, Arizona.

As we came off the Petrified Forrest plateau and made the curve around Holbrook, we encountered even more dramatic cloud buildup over Winslow up ahead.

I kept exclaiming to Kathy, "I've never seen such sky drama." The picture doesn't do the light justice in the lower right part of the pic It was a biblical parting-of-the-sea type light.

We landed at La Posada Resort in Winslow at 5:15 and had a very nice dinner in the Navajo Room, then sat outside to watch the sunset.

"Waiter, please send three Mountain Dew floats to the kids at table three when I leave, and tell their parents I say to enjoy the ride home."
—Matt the 1st
Posted by Bob Boze Bell at 8:02 AM