November 1, 2010
Had a number of insights and inspirations from our trip to Paris in early October. Among them:

• The most ubiquitous American brand I saw in Paris was the New York Yankees logo on baseball caps. All kinds of colors of caps, all over the place. Never seen red before (isn't that illegal since it's Boston's color?)

• Having been in Mexico and South and Central America where the Coca-Cola logo looms everywhere, like this wall logo from Samaipata, Bolivia: 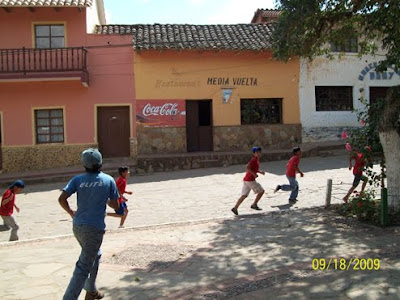 But I don't remember seeing one Coca-Cola logo in Paris. And for that matter no Pepsi, even in cafes.


• I have never seen more size zero, jean wearing, boot strapping, scarf flapping, knocked-out French women walking and smoking in my life. Sitting and smoking for that matter as well, but after a while it was kind of shocking to see a French woman walking WITHOUT a cigarette.


• Our electrical plugs do not fit their sockets. They have some weird diagonal deal which seems designed to say, "Let's make this so anything American won't work."


• Some of the street musicians play really cool rock songs (on the bridge to San Louis Island two guys, one with a one-string-bass and a guitar player with a rockabilly hairdo were belting out The Everly Brothers), but virtually all the other music we heard on the street and in the restaurants was kind of bland pop. Here's a photo of the duo, jamming on the bridge: 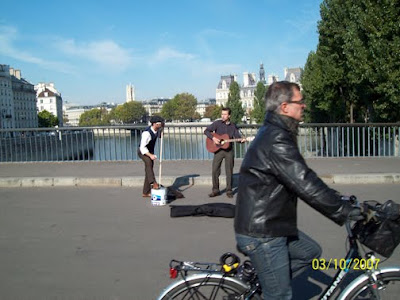 • Besides the many sidewalk cafes which proliferate in alleys, especially and other nooks and crannys, the sidewalk crepe makers were quite good, costing usually 5 euros ($7 US), big tortilla type wrappings with cheese and mushrooms, tomatoes and stuff. Very, very good. This one was near our apartment within site of the bridge, above: 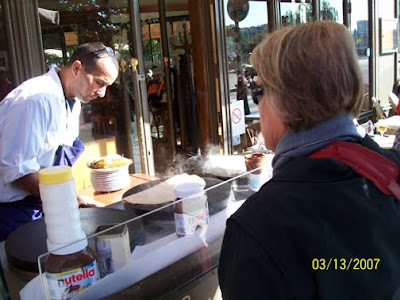 On the whole, the food in Paris is quite spectacular, and this extends to exotic foods. After our visit to the Centre Pomidou (the modern art museum) we walked down a blind alley across the street which meandered towards the Musee Carnavalet (The History of Paris Museum, which ended up being one of our favorites) and down one of these alleys we discovered a Thai cafe. Here's a soup I ordered: 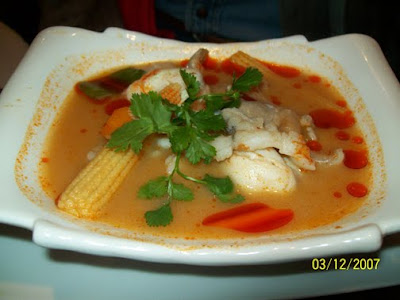 And yes, it was delicious.

• In the U.S. we have basic wine distinctions like, cabernet, merlot and pinot noir as categories, but they don't do that in France. Very different names, all different, sometimes with cabernet in the title, but mostly not. It's more of a crap shoot, but I have to say the bar is higher and most of the wines are way above average.

• The dates on the buildings and the paintings is just mind blowing. We make a big deal about the Hohokam in Arizona being here in the 1400s and the mystery of who they were and why they left and you end up with this concept of the 1400s as being primal, stone age stuff. Well, in Paris the Notre Dame was started in the 900s and a huge beautiful church, the Sainte-Chapelle was started in 1238. AND there are paintings of these buildings from the 1200s that are mighty nice. That was the big take away for me. The French have been doing this for a very long time and we are so young, so wet behind the ears. Gee, I wonder what ol' Harry has to say about this?

"The only thing new in the world, is the history you don't know."
—Harry Truman
Posted by Bob Boze Bell at 10:13 AM