November 3, 2010
As mentioned I was cleaning in the garage this morning and found a stack of old drawings and New Times layout boards (actual paste-up flats done with exacto-knives and rubber cement!) and I hate to admit it but most of them were pretty awful.

However, a precious few actually had some sweet charm like this little ink wash of a Kingman Rodeo scene at the corner of Andy Devine and Fourth Street: 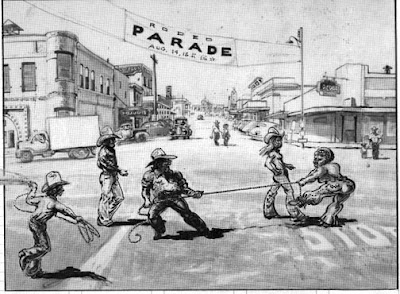 I could name everyone in this picture. Ha. Meanwhile, here is a very prescient illustration, done for a New Times doubletruck with the theme "Just Once," as in "Just Once I'd like to hear a bunch of old people at a dance say. . ." 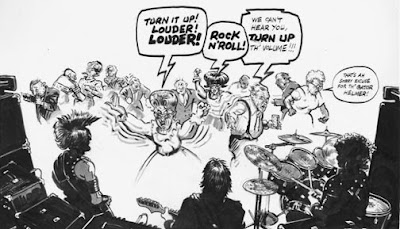 And, this is almost exactly what happened on March 22, 2008 when the Exits had their reunion at the Old Elks Hall (just up Fourth Street in the above street scene) and a certain member of the band did the gator and went down for the count.

Here's another scene that actually works. This is Ghandi in Arizona, also a doubletruck illustration wondering what Ghandi would have encountered in pre-war Phoenix: 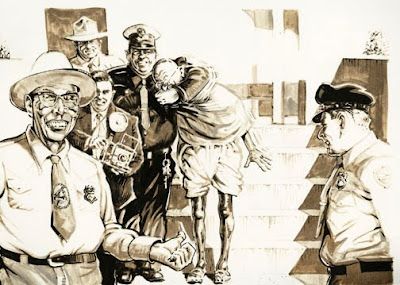 This was done on duo-tone Grafix paper and has a certain Old School charm, AND it looks like Mr. Peace Train himself there.

One last little gem, here's a group of eighties teenagers. I tried to make them really edgy and over the top, but somehow they just seem quaint by today's standards, no? 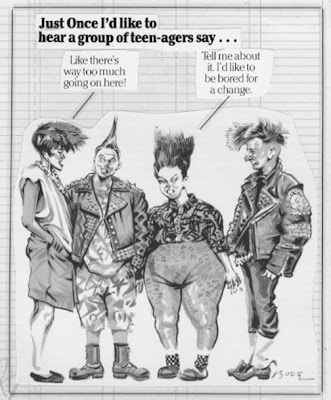