Geronomo's Cadillac Was Actually A Locomobile?

November 10, 2010
With the Source Book at the printer in Kansas City, I had a chance to work on a couple new True West Moments this morning. Abby sent via dropsend, the "Ay Chihuahua!" TWMoment this morning, and then after lunch I whipped out a drawing of Geronimo, the tycoon, behind the wheel of a roadster:


This is taken from a famous photo of Geronimo and other "chiefs" sitting in a car at the Miller Brothers' Ranch southwest of Ponca City, Oklahoma. The date of the photo is June 11, 1905 and is allegedly the inspiration for Michael Martin Murphy's song, "Geronimo's Cadillac." Although the online information says the car is actually a Locomobile, which seems almost too precious to be true. Really? Geronimo in a Locomobile? I want one of those! 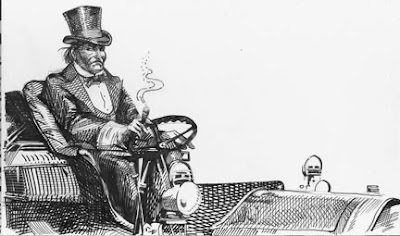 Of course, I added the tux (however, he's actually wearing a top hat like this in the photo) and the cigar. This is to illustrate the fact that after his surrender in 1886 the G-Man became quite the celebrity (Robert Utley coined the phrase "Exiled into celebrity," which I poached for the TWMoment, with his permission). Geronimo charged for appearances, his autograph (soldiers at Fort Sill supposedly taught him how to sign his name), and even sold the buttons off his shirt and jacket at train stops on his way to fairs, expositions and inaugural parades. When he died in 1908 he had amassed $10,000 in the bank. I believe the bank was in Lawton, Oklahoma. Anybody know if that's where he had his merchant account?

"It's easier to change directions while you're still moving."
—Debra Winger
Posted by Bob Boze Bell at 4:30 PM