November 3, 2010
Another series of cartoons I found in the garage this morning were about visiting Europe, specifically France. Evidently thre was some concern, even back in 1986, about violence (I can't remember why, can you?): In this same series (which ran in the Phoenix New Times) from June of 1986, I also poked fun at the snootiness of the French: 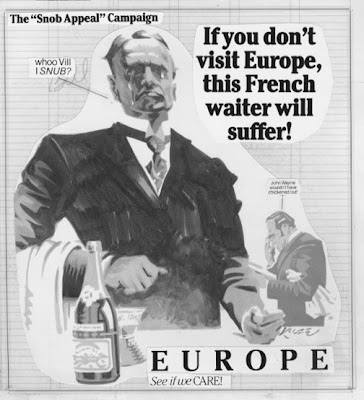 I wouldn't make fun of the French now, like this. Why?


"You can't have a thick passport and a narrow mind."
—Old Vaquero Saying
Posted by Bob Boze Bell at 2:39 PM