Geronimo for mayor of Phoenix

November 3, 2010
I was cleaning up in the garage this morning and stumbled upon a pile of layouts for old editorial cartoons I did for the Phoenix New Times back in the 1980s.

Now that we're all election-weary, I think it's time for a little levity, Apache style: 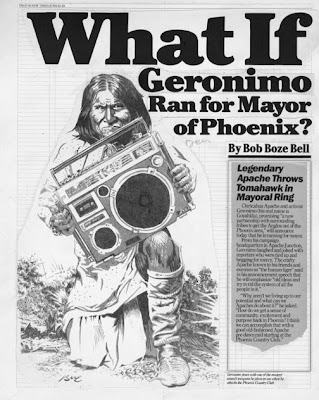 Here is a part of page two: 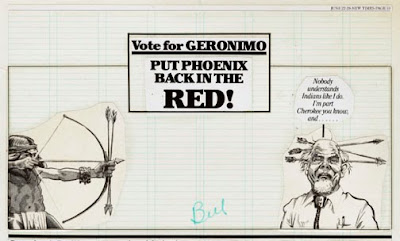 When asked about his reputation as "a savage" the candidate replied, "I don't know a savage way to top Hiroshima."


The G-Man had a couple catchy campaign slogans:


• A vote for Geronimo is a vote for an Anglo-free Arizona!


• In your heart, you know he's dangerous.


"Bureaucracy, the rule of no one, has become the modern form of despotism."
—Goyathlay
Posted by Bob Boze Bell at 11:24 AM