Source Book Out the Door, Finally

November 9, 2010
We were up against it this time. Two people leaving, one in the hospital, a new board and our giant, record breaking ninth annual Best of the West Source Book clogging up every bit of computer space we could find. Thanks to herculean effort by the sales crew, Sheri, Sue and Joe, and Abby in production and Meghan and Lauren in editorial, we were able to upload our final files about an hour ago.

Whew! Now on to our January issue, which will feature some pretty cool Apache stuff. It's the 150th anniversary of the Bascom-Cochise "Cut the Tent" affair and we've got big plans.

Went home for lunch and whipped out a gonzo Apache warrior: 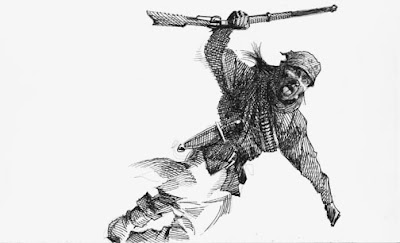 "A saint does not dissolve the chaos; if he did, the world would have changed long ago. . .It is a kind of balance that is his glory. He rides the drifts like an escaped ski."
—Leonard Cohen
Posted by Bob Boze Bell at 5:21 PM