August 14, 2013
Big day today, with a history talk tonight over at Cartwright's (sorry, sold out), then we're off tomorrow for the Second Annual True West Railfest in Durango, Colorado.

Last night, after work, I went down to Watson Hat Shop and picked up my new, custom-ordered, summer straw:

While I was waiting for Eric to tweak the brim and stamp my initials in the hatband I trotted over to Bryan's Bar-b-que and tried an outrageous dish:


Bryan told me that during this part of the summer he is going to be offering outrageous stuff every week just to keep it interesting. It was hard to get past the "I'm actually eating a pig's ear?" but I must say I enjoyed it. Not sure I'll order another one, but it was "interesting."

Got up this morning with an ambitious idea for the Sadie Marcus article. Spent about an hour and a half on this and it just died:

That's Johnny Behan on left, and I was going to have a naked Wyatt on the other side of her as well, but it is just lame, overworked, under-rendered. Caught somewhere between Bob Peak and Reg Manning. I had such big plans for this, but this is what happens when the left-brain takes over and snuffs the life out of everything.

In frustration, I grabbed another board and literally whipped this out, which says more in half the time of what I wanted to say: 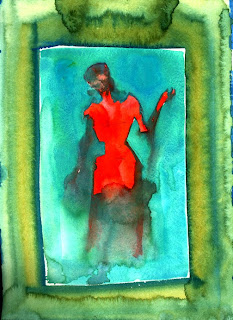 And, by the way, is totally right-brain. You'd think after 66 years, I might get a clue, but I don't know.

"It turns out a nymphomaniac is really just a divorcee with a normal sex drive."
—Old Vaquero Saying