January 14, 2015
I need to make amends for the sake of my honor. I stole content and I am ashamed. This morning I sent this message to the makers of "The Interview."

Dear Sony,
Last month I was in Seoul, South Korea, just before Christmas, and saw all the commotion for your star-crossed movie "The Interview." Like many Americans, after reading about the hack and the threats I actually changed my mind and wanted to see the film. I resigned myself to seeing it at a later date when we got back to the States.

Several days after Christmas, when my wife and I were visiting my son and his wife in Chiang Mai, Thailand, talk turned to seeing a movie. My son Tommy, who teaches world history at an international school, said the theaters there showed relatively old movies, but we could buy a more current film from the mall. In other words, a pirated film. I used this opportunity to tell him this is stealing from artists, people like me. Being somewhat of a Socialist, Tommy argued that big corporations don't miss the money and people in the third world need to make a living. This really upset me, and I really came down on him, restating my belief, in no uncertain terms, that it's stealing from artists—PEOPLE LIKE ME.

The next day we were at the mall and I saw "The Interview" for sale for $2.50 and I bought it. We really enjoyed the film and I have to say, the graphics on the package were perfect to my eye and the quality on the picture and sounds were crisp and clear. Not sure how they make money at $2.50, but anyway, I felt horrible. In fact, I'm sending this off today: 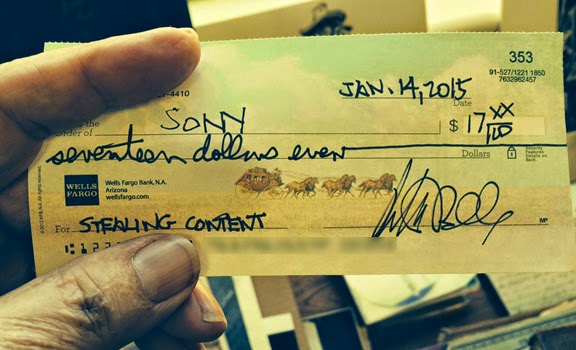 The $15 is to cover the price of the video and the extra $2 is for Diana Bang. Please give the extra $2 to her and tell her I thought she was fantastic.

"Corporations are people, my friend."
—Mitt Romney
Posted by Bob Boze Bell at 11:52 AM