Copy Cat vs. Copy That: Warhol, Schenck & Credit Where Credit Is due

I read with interest the new Supreme Court case about the Andy Warhol series on Prince which were based on a portrait taken by a rock photographer. 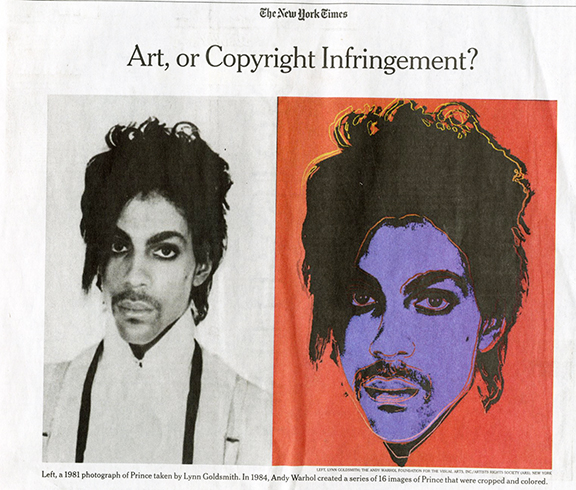 The entire case arose from a routine magazine assignment. A rock photographer, Lynn Goldsmith, was assigned by Newsweek, in 1981, to take photos of Prince in concert and at her studio. The magazine used the concert photos and she kept the portraits. Three years later, Vanity Fair magazine hired Andy Warhol to create an image for a feature article, "Purple Fame" (Prince's movie "Purple Rain" was in release). The magazine paid Goldsmith $400 to license one of her portraits as "artist reference" agreeing to credit her and to only use it in this single issue. Ouch. I know a thing or two about one-time-rights and that is a sticky wicket.

Warhol allegedly did 16 different takes on the photo, cropping and coloring each one in his inimitable style. Later, when Warhol died in 2016, Vanity Fair paid the Andy Warhol Foundation $10,250 to use a different Warhol Prince portrait on the cover, based on the same photograph. Ms. Goldsmith received no money or credit.

The key issue here is, did Andy add "something new, with a further purpose or different character, altering the first with new expression, meaning or message"?

That, my friends, is a slippery slope. Here is another knock-off closer to home. 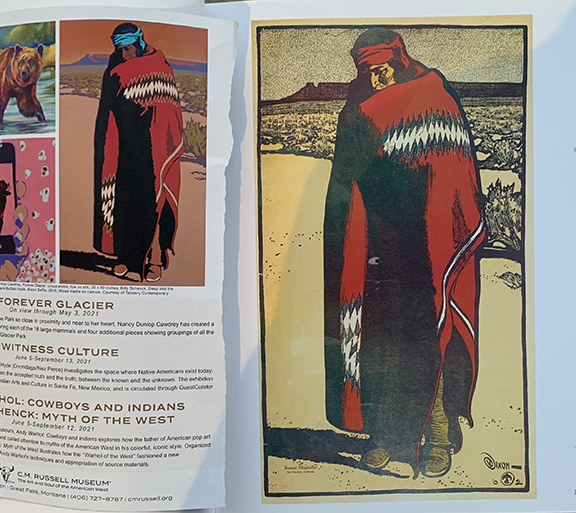 That's the artist Maynard Dixon, at right with his original illustration of a blanket wearing Indian done for Sunset magazine. And there's the fine artist Bill Schenck, doing a direct knock off, on the left. Does a turquoise headband and a red sky alter the meaning of this painting? It's also ironic that the Dixon image is technically an illustration done for the cover of a magazine and the Schenck version is a painting done as fine art. Is it an homage, or, is it a blatant rip off? I lean towards the latter, but then, I am merely an illustrator in his eyes.

When a friend of mine asked Mr. Schenck what he thought of my work, the fine artist said, "You mean, Bob Boze Bell, the illustrator?" 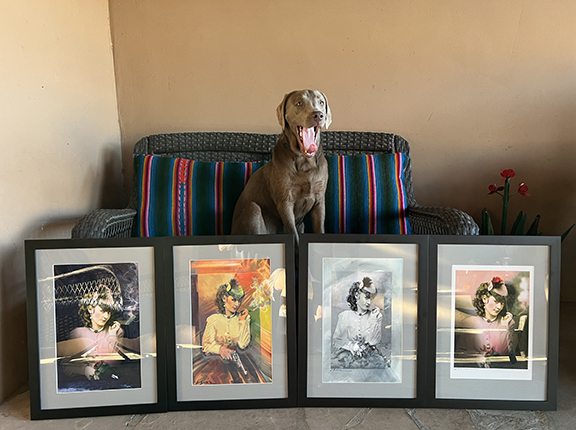 Uno Laughing at my four Lottas

I am reminded of all this because when I was growing up almost every single adult who saw me drawing had the same question: "Did you copy that?" The inferred message was, is that an original God given talent I am seeing, or did you merely copy that from a real artist?

When it comes to Warhol vs. Goldsmith it seems that the answer is somewhere in the middle, but I would lean towards giving Ms Goldsmith a piece of the action.

On a related note, in the fine art world there has been a long history of looking down on "illustration" as opposed to "fine art" (see Bill Schenck quote above). Here's a good analysis of the chasm:

"For decades, the fine art community derided illustration art. The term illustration was used as a pejorative, and Norman Rockwell’s name was used as an adjective rather than a noun to describe any representational imagery, whether it was intended for repro­duction or a museum wall.

"The schism that exists today between illustration and fine art is really between abstract art and representa­tional art. In the 1950s, when abstract expressionism and the action painters ruled supreme, Andrew Wyeth was tarred with the same brush as Norman Rockwell. Andrew Wyeth was no more an illustrator than Michelangelo or Da Vinci. He was simply a narrative, representational painter.

"The prejudice continues among many painters and critics who are both refugees and disciples of refugees of the 1950s. Now, 'times they are a changin' ' and there is a ground swell of appreciation for the illustrator’s art in general, and Norman Rockwell’s art in particular.

"The recognition of Norman Rock­well’s work accorded by major muse­ums across the country such as the High Museum of Art in Atlanta, the Corcoran Galley of Art in Washing­ton, D. C. , the Solomon R. Guggen­heim Museum in New York City and a wonderful feature article by Michael Kimmelman, art critic of the New York Times, all seem to indicate one thing. Whether or not illustration is high art or low art, it is art.

"The comic genius Rube Goldberg, famous for his zany drawings of unnecessarily complex design, once quipped, 'I’ve got nothing against Picasso. He works his side of the street and I work mine.'

"I would like to quote a dear friend, Jane Eisenstat of Palo Alto, Califor­nia. Jane is an illustrator, a painter, a writer and an educator. Once, when Jane was asked the difference between a fine artist and an illustrator, Jane replied with a sly grin, 'There are no amateur illustrators.'”

"I think your idea to use my idea is a great idea!"

—BBB, copied from a website on copy cat quotes