July 16, 2014
Woke up at three (thanks Bryan's Bar-B-Q!) and finally got up at four and worked on a couple projects. I've got my curator coming by this morning to start archiving my artwork.

Ken and I are on the homestretch of The 66 Kid film which we are going to sneak at the Route 66 International Festival on August 15. Four weeks to finish it. Mike Torres is bringing by the final mix on the soundtrack music, which he and Hans Olson performed.

Went for a walk up Old Stage at 5:30. Everything is tolerable out until the sun tops Continental Mountain at 5:55. Then it just gets ugly and uglier. The good news is we only have 16 more weeks of this. Ha. Actually about six to eight more weeks.

Filled the seventh garbage bin, in seven weeks, with discarded art and hauled it out to the street for the recycling truck:

Garbage In: Jesse James Hangs Out

That painting on the left was done in about 2002 when I was hot on the trail of the James Gang's retreat from Minnesota. It was supposed to illustrate Jesse and Frank riding the stolen, blind horse that ran into a tree, before they bailed on it (well, that and a sentry at a bridge crossing firing on them). Overworked the puppy. Had great photo reference of Chip DeMann and another re-enactor riding double on a horse, while wearing dusters, on the actual escape route of the gang west of Faribault, Minnesota. Had the right corn fields, buildings, everything. And still tubed it!

As I took this photo, above, I noticed another two paintings sticking out and went over to give them one more look before closing the lid: 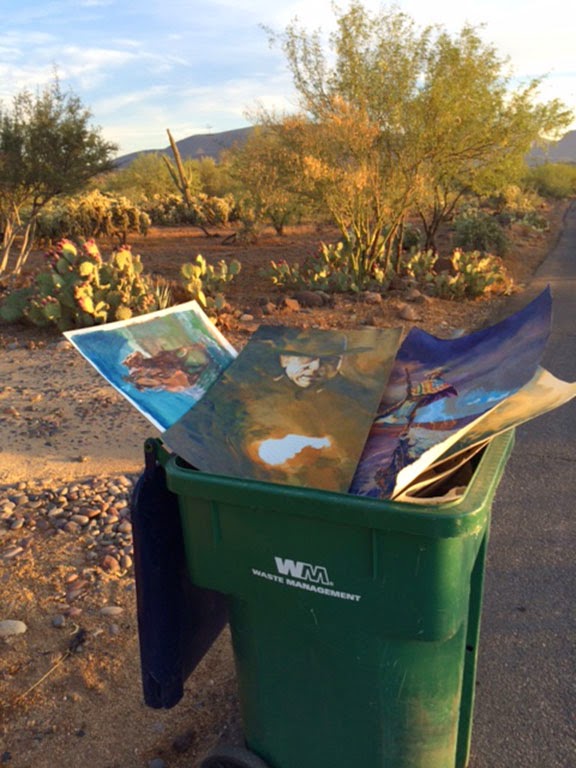 Garbage In: Mickey Free and Tommy Lee hang out

Yes, the Mickey Free painting, on the right, is even worse, in the over-worked department, and the Tommy Lee Jones cover concept, middle, (done for a proposed True West cover on "The Missing") is a piece of crap as well.

If you are thinking, "Hey, Boze, don't throw those away, I'll put them on the wall in my den," just remember I don't WANT you to do that. And I especially don't want to come to your house and see these hanging on your wall. That's how bad I think they are.

Of course, one can over think these things and that in itself is something i am very good at.