July 5, 2014
Got up at 5:30 and did my morning hike up to Morningstar and back. Threw my long pants in the Flex, drove down to my neighbors—Jon Nelson's house—and we took off for Prescott at 6:30, arriving in the downtown staging area at eight.

Jon, who is jokingly known as the oldest unpaid intern, drove the True West Checker extended cab in the parade and Greg, Sarah and myself handed out 16 boxes of magazines on the route. Saw may old-timers I know: they always say, "Hello Bob,"  about the way I imagine Billy the Kid said it to Bob Ollinger. It has an edge of familiarity tinged with a pinch of irritation (oh, it's YOU again). Ha. 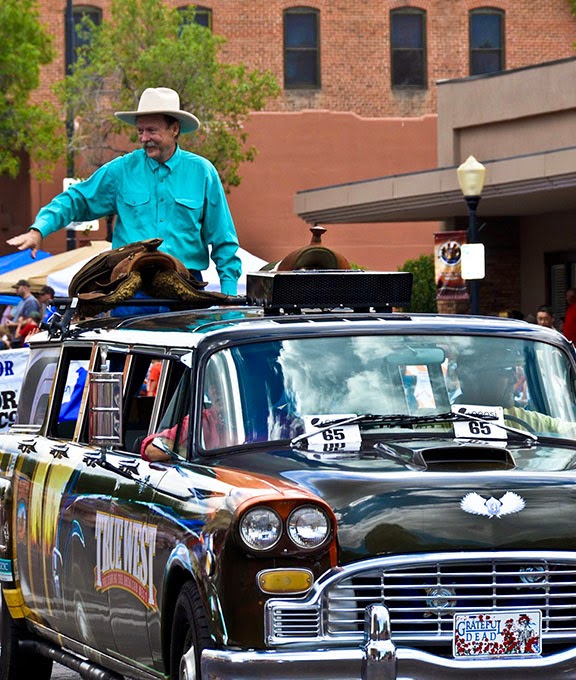 This photo was taken by Dale Schwamborn of Dewey, Arizona and he shared it with me. I actually walked most of the parade route, handing out magazines, but when we ran out, just north of the Palace Saloon, I jumped on the back for the scenic showoff part of the parade. In fact, when I was walking, one of the sexiest radio personalities I ever worked with—Carol Springer—ran out to give me a hug, then said in my ear, "You heard about Chuck [a radio GM we both know], didn't you? He died yesterday." Well, crap. That was a downer. I can't even do a parade without a death reminder? It's like a bad metaphor in a bad movie: Sexy DJ runs towards me in slow mo and whispers in my ear: "You're next, cowboy." When I turn to look at her sashay away, she turns and it's Skeletor. I know so many people who are on the ropes, health wise, it's not even funny. What do you do? Keep walking, keep smiling, keep waving. That's the gig, Jack.

Oh, and by the way, here is video I shot of Carol and the KSLX gang back in the nineties.

The opening sequence was shot for a TV show we did at Channel 10. The rest I shot on my petite video camera. Didn't have time for any pictures at the parade, but as we rounded the corner I took this little parting shot video:

Lee Anderson and Concho Steal The Show at Prescott Parade

"A wink is as good as a nod to a blind mule."
—Old Vaquero Saying
Posted by Bob Boze Bell at 4:17 PM