December 30, 2014
Yesterday there was a ceremony for Pattarapan's late father and grandfather at the Pothong household. The women got up at four in the morning and started cooking, while Po Boon (father Boon) cleaned out the driveway and living room for the arrival of the monks. Here is the feast being prepped on one of the tables:

While this might make a lovely spread anywhere else in the world, the Thai keep going. Here is the second table:

I wore my best Cave Creek Cowboy gear out of respect for Pattarpan's father, who was a policeman who was killed on duty. 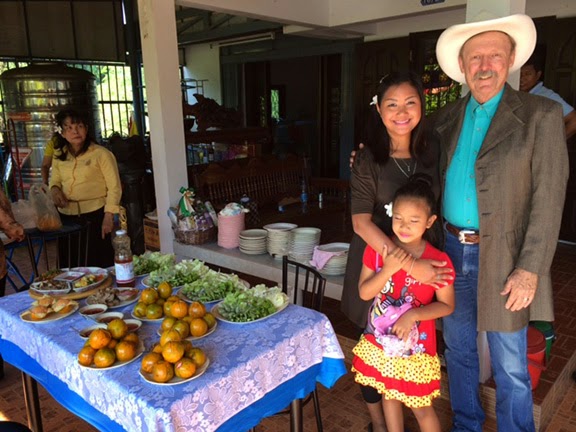 The monks arrived in a Toyota 4Runner at ten:

The monks were ushered into the cleared living room where matts had been set up in the Thai tradition:

We had a ring side seat in the second row. Grandma Ya (the only person present older than me) was in the first row.

After a few remarks by Po Boon, the monks grabbed a string that they held between them, and then one of the monks chanted something with a fan, or, a kind of auction bidder's card with a handle, in front of his face, (according to Pattarapan, this is to insure the words are spread to the widest corners) and then they all started chanting. It sounded very Native American to me like the chanting I have heard at Apache and Navajo pow wows. I asked if it was in Thai and the answer was no, it's in ancient sanskrit, sort of what Latin is to Roman Catholic ceremonies, I guess.

One odd thing happened: the Thais are so polite about everything, but in the middle of the chanting ceremony, several guys showed up and started eating at the table next to us and talking loudly. I thought it was very rude, like someone coming into a church in the middle of a sermon and eating Burger King and talking loudly about last night's football game. Evidently, the latecomers were from a station higher than the host and this is considered appropriate. I couldn't quite comprehend this, but everyone else seemed fine with it.

Afterwards, Kathy helped clean the dishes and she said she had a ton of fun "playing in the water."

Kathy and Jaeo having fun with water, or, as it's known back home: doing the dishes.

During lunch the host broke out the Singha beer and we elders (that would be the men) went to town. In no time, our IQs were shooting up through the roof and we solved many of life's persistent problems.

"Man who drink too much beer see several men about a horse."
—Old Vaquero Saying
Posted by Bob Boze Bell at 7:11 PM