A Loving Tribute to Betty Radina

A wonderful woman passed last week at the age of 97. 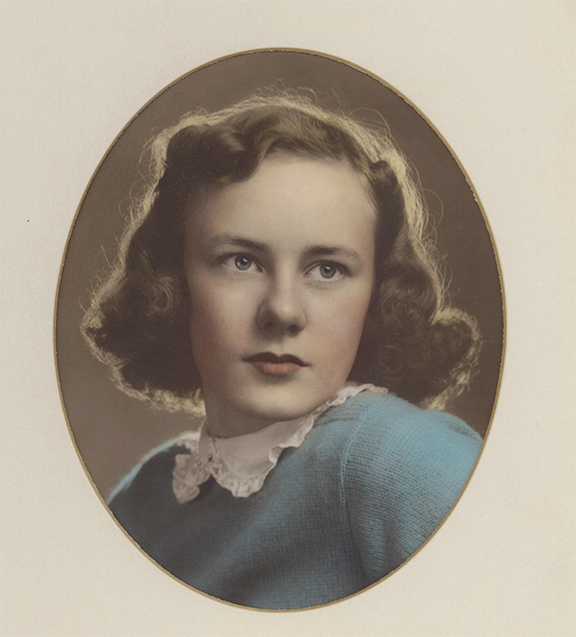 She was born in Essexville, Michigan, to Sidney Willet a fisherman and Jennie Black. She grew up in Unionville and went to St. Mary's Hospital Nursing School in Saginaw graduating with the class of 1945. She married Earl Radina and they had four kids. In 1958 they moved to Phoenix, Arizona where Earl opened a cafe and she went to work as a nurse at St. Joe's Hospital. She was head nurse of Barrow's Neurological Institute from its founding until 1974.

Betty was widowed at age fifty when Earl passed away in August of 1974. She then took over the family restaurant, and ran Earl's Fine Foods in Phoenix until 2007.

"She loved Glen Miller, Frank Sinatra and Dean Martin. She was a big fan of James Garner. And she loved Laughlin, Nevada and she and her friends did numerous bus trips there and she and her gal pals loved to play poker. She was a poker fiend. She played Mahjong until she was 95 and consistently won."

"My brother Donnie told me about Verde Hot Springs where young college females were running around stark naked, so I dove up to the Verde Valley in my new Jeep and I had the only vehicle that could cross the river which is where the spring was. I saw plenty of naked females and drank beer with them. Late in the evening I decided to drive back to the Valley and on the way out of there, in the dark, I missed a turn and rolled my jeep. I remember crawling out of it and my arm was scraped up pretty bad and I sat down and went into shock. Fortunately, a couple of guys came down the road and pushed the jeep back upright. The battery was ripped out and ended up down in a side canyon and they went down and retrieved it and spliced the broken cables back together and got it running again. The whole fiberglass front was ripped off. So these guys got me back out on the road, and I didn't have insurance and I knew I couldn't go to a hospital and there was only one place where I could go to get medical care. I drove for two hours with one arm and went straight to my mom's house, arriving at four in the morning. I was crying when she answered the door in her nightgown. She took me into the shower and hosed me off, and then she dressed my wounds and bandaged me up. She helped me keep everything clean and she gave me the loving care I needed to carry on. Later when I was actually in the hospital for another serious injury she came in to see me as she did every night. She asked how I was doing and I told her that the IV in my arm was really hurting me, so she calmly leaned over and ripped it out which set off an alarm and the nurses came running in and they started yelling at her, but mom stood her ground and told them what they had done wrong and how to make it better, which they did. She knew more than they did. She was always our emergency room, no matter where she was."

"She loved the quail release in Cave Creek and she went every year."

"She was a Glen Miller, Frank Sinatra fan, but she adored Jon Bon Jovi and she liked that he never forgot his roots. She liked the idea he married his high school sweetheart. She didn't care if he was a rocker and I just think that is so cool."

"I remember her being a brownie troop leader when I was in third grade. I know she did cub scouts with my brother Don and Brad and my sister Debbie, as well. She was a very busy woman who made time for her kids."

"She had a quiet dignity about her but she often had a twinkle in her eye and a conspiratorial smile that conveyed to me she was up for almost anything. She was always quick with a quip especially when anyone got snotty around her. I think this stemmed from being the head nurse at Saint Joseph's Hospital which gave her a gravitas that commanded respect from everyone. She always defended me and she even lent me money for publishing one of my books. She was just the best. I often called her my favorite mother-in-law because I had another one who was pretty solid, but not as sweet as Betty Jean." 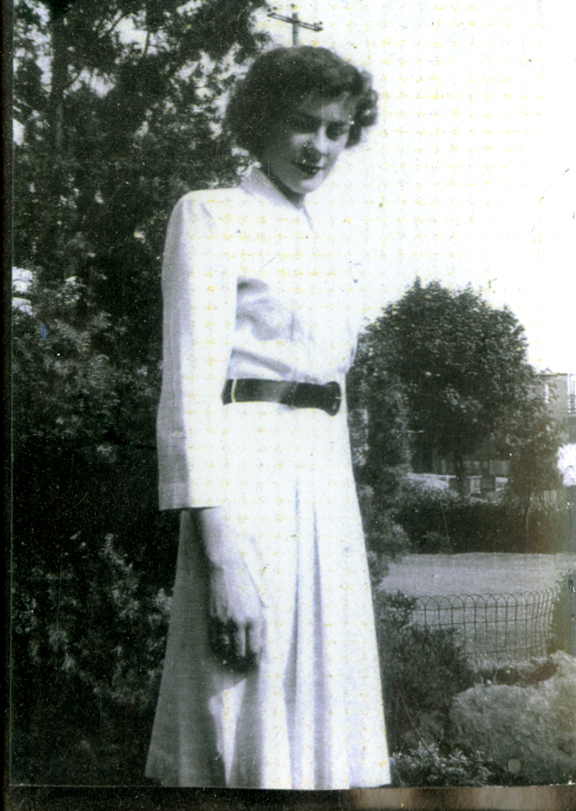 "I first met Betty in 1978. She was nice, smart and had a great sense of humor. I liked her immediately and that never changed - and neither did she. Rest In Peace Beautiful Betty." 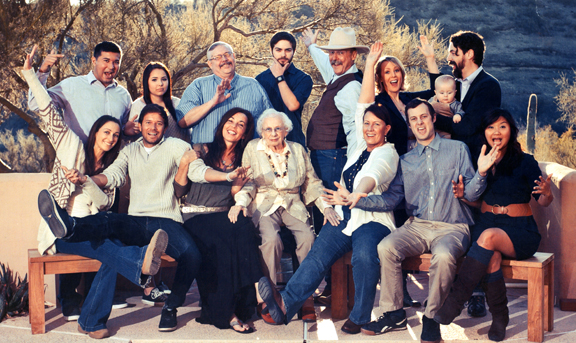 Betty (center) and her brood
January, 2014
"As the first grandson, I always felt like I had a special place in grandma Betty’s heart. But as I read the tributes from the other grandchildren, I am reminded that this woman loved everyone unconditionally. After my mother died when I was young, grandma Betty became like a second mother to me. She was the closest thing to a mother that I had since 5 years old. She never missed a birthday, even well into adulthood. My favorite memories are of being in the kitchen during Thanksgiving and helping out in anyway I could just spend some extra quality time with her and following a long creating her favorite recipes.  I truly never have experienced anything but love from this incredible woman and she will be severely missed. I know our relationship will live on in a different way now."
—James Sol Radina, Grandson #1(second from left, seated, above)
"For me, the things I loved most about grandma was her ability to bring us all together. Some of my fondest memories as a child are with grandma at her house on Carole Ave. When I was a young adult I remember moving out on my own and realizing what a special place Grandma had. The garden, the cats, the neighborhood the neighbors. I always looked forward to Christmas meatballs and tamales, and going swimming at the pool down the street. I loved flipping through the family photo albums and walking the halls of her house and admiring the family (and how much I look like my mother when she was my age). When I got older and realized I should be helping to clean the kitchen Grandma would get irritated at me for putting the dishes away in the wrong spot. As a teenager Grandma sewed with me. She let me pick out the fabric and I chose monkeys. I loved doing yard sales with grandma! Me and my friend Maki did it a couple of times. In college I came by her house once and she was having a yard sale and I bought a book her neighbor had for sale called “Cooking with 6 Ingredients or Less” and that’s how I learned to cook for myself (not well). When I got married and had kids she adored my babies and my husband. I’ll miss her dearly

"
—Deena Bell Bortscheller
"I can sum up G Betty in two stories. When I was a teenager I went to stay with her for the night and she got on me hard for not putting the toilet set down. It was a shock to me because she was usually so easy going and kind so if she got on you you knew you had done it. I never left the toilet seat up again (until I got married but that has always been more out of spite than forgetfulness). And then, when Amy and I lived in Phoenix we would pay periodic visits to her. One day we brought over the Disney movie Ratatouille where a rat aspires to become a French chef. Very inspiring story about overcoming odds. When it was over G Betty was not so easily moved to sentimentality. 'But still,' she said, 'no rats in the kitchen.'”
—Thomas Charles Bell
"Grandmother Betty Radina remains one of the most influential and caring people that I've met.  She had a gift for being light and agile in her character, whether she was hosting a family Christmas dinner or playing cards with her friends.  She was the type of person who lived gracefully and I believed she was rewarded with exceptional peace, gratitude and community.  It was my pleasure to know her in this life and be so close to such a great spirit and being.  I love you Rad-ma Betty!"
—Aaron Radina (standing at far left in above photo) 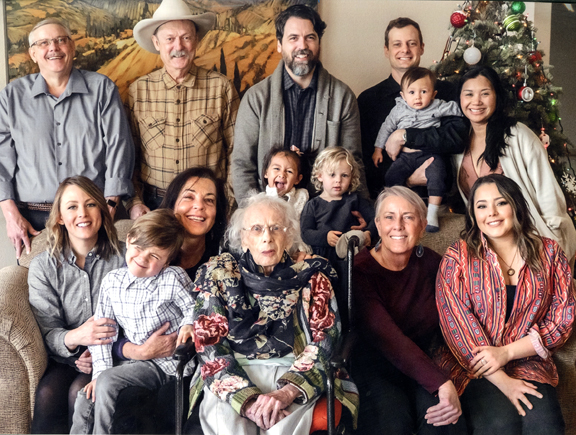 Last Family Portrait, December, 2019
"As a 'married into the family' gal, I had my first Christmas dinner at Grandma Betty's in 2009. We had a white elephant gift exchange and if I remembered correctly, Grandma ended with one of Tom's gag gifts which was a book with a hole in the middle that was called "Insert Here". She smiled, made a face, and kept the book without exchanging it with anyone. That's when I knew this woman was awesome. Another cherished moment for me which ended up being one of the most meaningful stories of my life was when Tom and I decided to get married. Tom had asked Kathy about rings, Grandma Betty offered up hers. We went for dinner there while G-Betty brought up a ring decked with diamonds. There were about 6 diamonds on this ring with various sizes or carats so I chose 5 small diamonds sitting at the bottom of the ring. After the selection, I looked over and G-Betty said 'Oh, those were the diamonds on my original wedding band' and I teared up and hugged her. She was the OG Queen B, way before Beyonce and I am so privileged to have traveled all the way from Thailand to have met her and married into the Bell-Radina clan. Miss you a TON Grandma."
—Pattarapan Pothong Bell, (second row, far right in above photo)

"Every once in a great while, you have the great good fortune to meet someone really special.  Betty Radina - Mrs. Radina was one of those people. She was kind, loving, caring and fun. I'm so fortunate to have known and loved her."