April 20, 2010
When I was growing up in Kingman many families went "to the lake" on the weekend to boat and water ski. That would be Lake Mohave on the Colorado River. Even though it was blistering hot out, the water was not warm, but it was warm enough to swim comfortably.

But the real shocker was when we went to the river at Bullhead, just below Davis Dam, it was really cold. We were always told it was freezing cold because of the water coming out of the bottom of Davis Dam, which would make some sense, but, I bought a bunch of new books on the history of the Colorado (see list below) and while I was reading of 1860s explorers who were running up and down the river long before the dams were built, one explorer complained the water was so cold it "hurt our teeth." 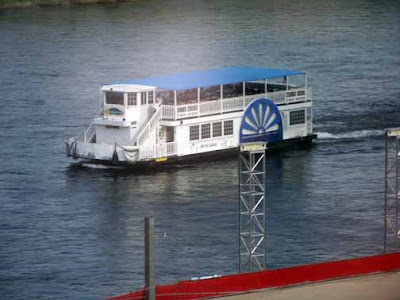 Trust me, the water in this picture is freezing cold. This photo was taken out the window of our room (#7095) at the Aquarius Hotel (formerly the Flamingo Hilton) in Laughlin.

So why is a river that runs hundreds of miles through 122 degree desert heat, freezing cold? What's up with that?

Books I bought at the Arizona-Nevada Joint History Conference in Laughlin:

• Yuma Frontier Crossing of the Far Soutwest, by Clifforn Trafzer ($12)

"One of the coldest winters I have ever spent was a summer in San Francisco."
—Mark Twain
Posted by Bob Boze Bell at 4:36 PM