April 27, 2010
Thanks to the Googling expertese of Meghan Saar, I finally located Richard Lingenfelter, the author of "Steamboats on the Colorado". He lives in San Diego and on the phone answered a critical question for me about one of the techniques that the early Steamboat pilots used to get over sandbars. When these intrepid men, like Jack Mellon, would encounter a sandbar they had several methods for getting over them (all they needed was two inches of water!). According to Richard, if they failed to crawdaddy over (with poles and maneuvering), they would turn the big boat around and reverse the paddle wheel and chew through the sandbar, and if that failed they would take the anchor, out in a small boat and plant the sucker on the far side of the sand bar, take out the slack with a wench, and then hand crank the boat over! Just incredible stuff. And, I have never seen this portrayed in a movie. Have you?

Speaking of steamboat movies, over the weekend I whipped out a small master shot of the Colorado River in flood stage, late in the afternoon with steam rising off the water and a Steamboat, The Gila, chugging along (lower, center). 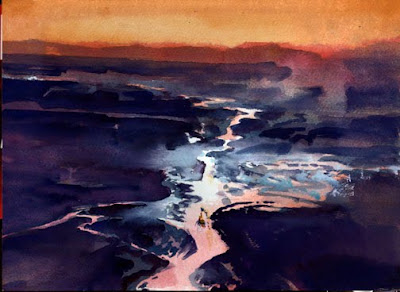 As the camera glides downward we hear Mojave In-din chants and maraca rhythms, oh and very loud cicadas. Got to have loud cicadas.

Oh, and one more thing: when we were in Laughlin two weekends ago for the history conference I saw an ad for a John Fogerty concert and the price was $139.95, plus tax! Per ticket! I went up to the room and said to Kathy, "How much would you pay to see John Fogerty?" And she said, "$15." Later, I was cruising around Laughlin and I saw a marquee advertising for a Credence Clearwater Revival Tribute Band called Fandango. Tickets were $19. Still four dollars too high for Kath. Me, I would have gladly paid $65 (to see Fogerty) if I could watch the show in a barca lounger and the hotel staff promised to wheel me out and up to my room by 9:30.

But that's just me still being wild and crazy.

"Left a good job in the city, working for the man every night and day."
—Proud Mary, Credence Clearwater Revival
Posted by Bob Boze Bell at 10:46 AM