April, 27, 2010
As I mentioned yesterday, we received a ten page letter from Belgium raving about Johnny Boggs' current column on "The Ten Best Westerns You've Never Heard of."

Here is one of the pages from Peter Stadlbaur of Maubray, Belgium: 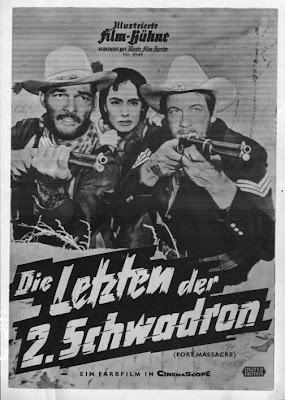 Johnny picked "Fort Massacre" (the title loosely in German, above) as his number two pick. Peter says in his letter, "Great! I missed this movie when it came out in 1958 and was looking for it desperately—until it was shown just lately on a German TV Channel (in German) and I loved it. Never before or after Joel McCrea was meaner and tougher as he was in 'Fort Massacre.' Besides: JOel McCrea is my favourite Western actor.The film was grim—the characters without any illusion—'The Naked and the Dead'—style. Again: Great! I am now looking forward to watching this film in the original U.S. version and in a regular movie theatre (again)."