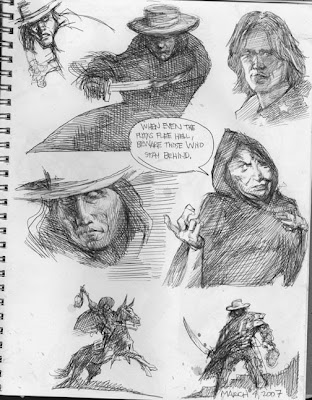 This was right after Paul Hutton and I joined Bob Brink in New York to attend the annual New York Comic Con in February of 2007. No doubt inspired (or infected) by the mucho macho Manga comics I saw there, I whipped out this John The Baptist dangling head sketch (bottom, right).

Today, I saw it with new eyes and wondered if I could marry that dramatic sketch with a clip photo I have been saving of troops in Afghanistan enduring a sandstorm. I had to be back in the office at two for a design meeting, so I was under the gun, or under the knife, as it were. Did this in about 40 minutes. Here is the result: 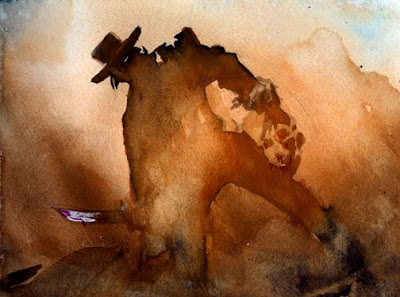 Pretty dramatic, no? Need to work on the dangling head a bit, but the swirling dust effects are right on the money.

"The world is full of men who spend their lives fleeing from something that doesn't pursue them."
—Old Vaquero Saying
Posted by Bob Boze Bell at 3:16 PM