Show Low vs A Straight Flush

October 27, 2010
Working this morning on another True West Moment about how Show Low, Arizona got its name. 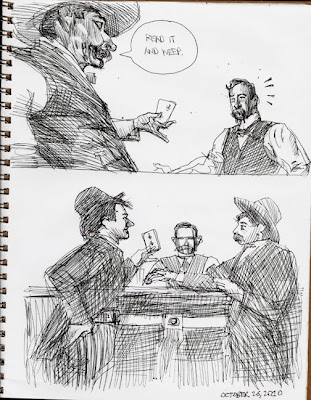 Two cowboys played a game of Seven-up to determine who got the land that later became the town. One of them "showed low" with a deuce of clubs and that's how the town got the name Show Low. Some of us have wished that the card game would have resulted in a straight flush.

That would be me, and six of my juvenile friends.

Bob McCubbin and Richard Ignarski came by today on their way to Tombstone for the annual get together down there. This year they're going out to Drew's Station and Galeyville. Been to both, not much at either.

"There are two things that are more difficult than making an after-dinner speech: climbing a wall which is leaning toward you and kissing a girl who is leaning away from you."
—Sir Winston Churchill
Posted by Bob Boze Bell at 10:46 AM