October 23, 2010
Got home last night at five after flying for 12 hours. T. Charles picked us up at Sky Harbor and took us to a new Mexican food restaurant he found on 16th Street below Van Buren, great carne asada platters. Pattarapan joined us. I loved the food in Paris, but Man, oh Man, I love our Mexican food.

As mentioned, I decided to wear my cowboy hat on my trip to France and I also brought along my Frontier Clothing custom frock coat. Here I am in Martmontre, high on the hill overlooking Paris. 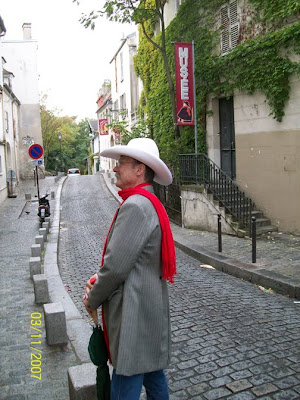 Note the dude in the Museum sign behind me in the similar scarf and pose (it's a famous French poster). Also note the date on the photo is off by three years. Ha.


The number one comment I got while traversing the City of Lights was, "Yee Haw!" Got it almost constantly, and one time from an entire group of school kids. The way they say it, you can tell they are proud to know the term in English and I never felt it was in a mocking way, they simply wanted to engage this exotic foreigner. Or, at least that's how I took it. Ha.


"To understand all is to forgive all."
—Old French Saying
Posted by Bob Boze Bell at 11:37 AM