October 24, 2010
Our trip to France was predicated on an inquiry from a French publisher to translate my Wyatt Earp book into French. Last Tuesday we took the bus from San Michel up the hill to Montmartre, getting off at Blanche, about a half block from the notorious Moulin Rouge, probably one of the most famous bars in the world. According to my host Gerard, they go through 800 bottles of champagne a night. It costs $150 euros each (about $175) to see the first show. Didn't make it to a show, but I was entertained by a behind the scenes tour of the notorious artist mecca.

After a wonderful lunch, the publisher Gerard, took Kathy and I on a walking tour of the high hills of Montmartre and we saw the house that Theo Van Gogh lived in, and for a short time, Theo's brother Vincent, lived there. Not far away we stopped and Gerard pointed across the street to a high glassed apartment and informed me that this is where Toulouse-Lautrec had his studio. It rained on and off all afternoon, so here we are with Paris parasols: 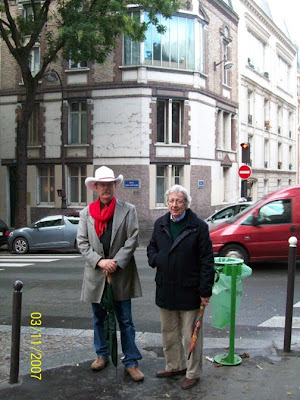 The French prostitutes called Lautrec Tripod because of his short stature and ample endowment. He may have been short, but he painted big. And, his work surges with enthusiasm, which covers most bets. Right Waldo?


"Enthusiasm is the leaping lightning, not to be measured by the horse-power of the understanding."
—Ralph Waldo Emerson
Posted by Bob Boze Bell at 10:18 AM