October 28, 2010
Sometimes you have cleanse your palette, Been drawing a ton of Old West characters and, of course French subjects, so, this morning, I thought I'd whip out a Stoned Policeman. 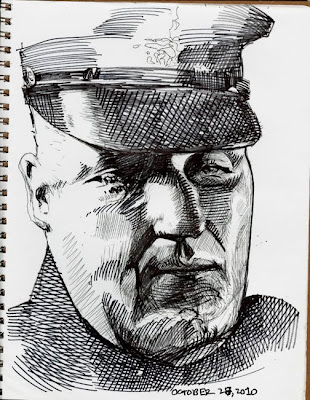 Just got a call from my step-father, Lou Cady, Jr. who lives in Cibolo, Texas. According to Lou Cibolo means buffalo in Spanish. He moved there to be with family after my mother passed in 2007 (they last lived in Cody, Wyoming). He's 89 and still shoots archery. He told me he takes the True Wests I send him down to a home where everybody watches the Westerns Channel. He told me they love the magazine and when I asked him if he wanted me to send them a complimentary subscription, he said, "No, I'll make sure it circulates." Ha.


"You can't cross the sea merely by standing and staring at the water."
—Rabindranath Tagore
Posted by Bob Boze Bell at 9:54 AM