December 6, 2015
Nobody has a problem with the Kid playing croquet. It's just that he looks a little naked without his accouterments: And, what we really want to find is an image of the Kid and Sally Chisum and the Bowdres and Deluvina and Chavez Y Chavez and Big Jim French and the Coes lined up and posing on the parade ground at Fort Sumner. Now wouldn't that be a find? 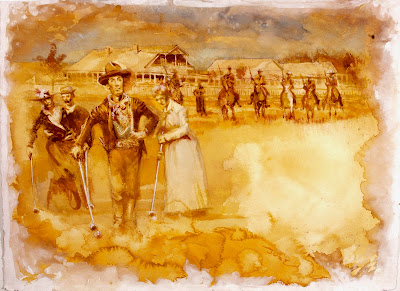 I'm also doing the killing of Agent Bernstein at the Mescalero Apache Agency. The Kid got the blame (and credit) for the killing but it was actually perpetrated by the vaqueros riding with the Regulators that day. 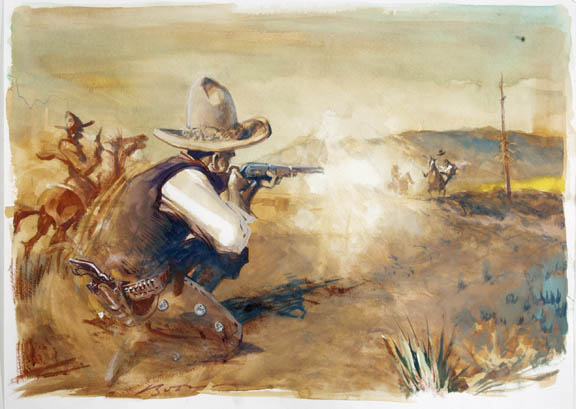 Daily Whip Out: "Shot Out of The Saddle"

Riding 19 strong, the anglo wing of the Regulators broke off to imbibe at a spring on the opposite side of the canyon. The Hispanic contingency rode on and ran into an Apache hunting party and a fight broke out. Agent Bernstein rode out from the agency to see what the trouble was and ran into a hailstorm of lead. Bernstein was shot out of the saddle and died, bleeding from four wounds. The Kid was getting a drink at the spring when the shooting started and his horse spooked at the gunfire and took off.  Unhorsed, the Kid jumped up behind George Coe and the two took off just as a party of troopers showed up and started firing on them. There's more, but it'll be in next month's Classic Gunfights.

"Artists do their best work when they're old or young. Middle age is the enemy of art."
—Orson Welles