December 9, 2015
I am researching a piece on the history of the draw string—more popularly known as "The Stampede String." Here is the premise: In 1880 George Parsons was on a stagecoach bound for Tombstone when the stage driver decided to give the passengers a thrill and whipped his horses into a run. Unfortunately, the driver's hat blew off in the wind and he had to stop the stage (that took a half mile) and turn the stage around (not easy in the desert east of Tucson) and then go back two miles and try to find his hat—in the dark!

You never see this in a Western movie. Why not? If I had to guess, it impedes action. You might even call it anti-action. And this is probably one of the reasons you never see anyone lose their hat on a wild ride (can you name a movie where someone loses a hat while on horseback? Update: leave it to Paul Andrew Hutton to come with this: "in the final cavalry charge in Fort Apache George OBrien's hat blows off."). You know it happened all the time, both in the real West and in filming movies. Imagine how many takes have had to be re-shot because someone in a chase scene lost his, or her, hat.

One simple innovation would solve all of these problems and that is the draw string/ stampede string, you know, that string attached to the hat that tucks under the chin to keep the hat from blowing off. But in my experience, American cowboys seem to be loathe to use them. 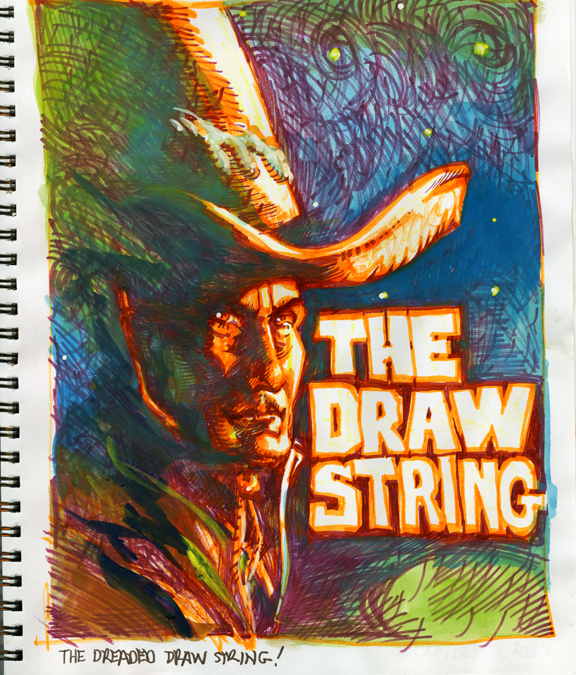 Daily Whip Out: "The Dreaded Drawstring"


The vaqueros of Mexico often wore them and even anglos playing vaqueros wore them in movies (Buck Jones in "South of The Rio Grande" which the above caricature is based on). And by the way, I love the old days when cowboy hats went clear to the ceiling.

So, anyway, why are Stampede Strings so rare on American cowboys? And, more importantly, is there a photograph of any cowboy wearing a stampede string? Our readers would like to know, and so would I.