Confessions of a History Performer

April 24, 2017
Had a bunch of fun at the annual Arizona History Conference, this year held at Little America in Flagstaff. Myself and the Distinguished Professor, Paul Andrew Hutton, opened the sessions on Friday morning with a one-hour, tag-team talk, about our decades long efforts to capture the enigmatic Mickey Free, at least on paper. The panel was chaired by our book editor, Stuart Rosebrook and a good time was had by all. 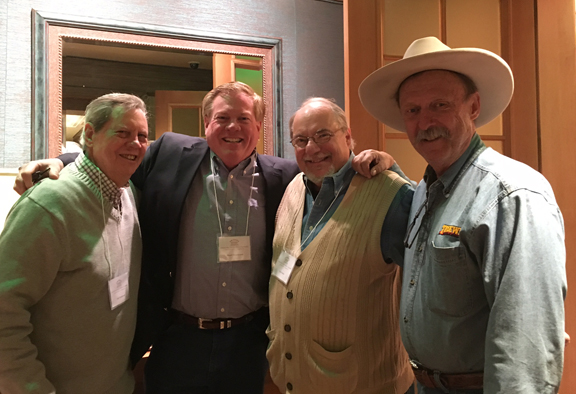 
Fast forward to Friday evening when a book auction was held in the dining room prior to dinner. The proceeds all went to the Historical Society so in the spirit of a good cause, bidding was enthusiastic but restrained and many titles were purchased at levels that can only be described as mercy bids. I personally wanted to leave and go to dinner, but Hutton was beside himself with curiosity about what bid his book would bring, so he and Bruce Dinges, the director of the entire conference, mosied around to the other side of the room so Hutton could see who would bid on his book and more importantly, how much dinero would it bring in.

Meanwhile, I reluctantly waited. And waited. And, to be honest, John Langellier bought me a second glass of wine. Most of the titles were going in the $15 to $20 range and for an author like myself, this is humiliating and I didn't enjoy the spectacle or the piddly outcomes.

Finally, about 16 titles in, a hardback version of Hutton's book "The Apache Wars" was held up. The auctioneer barely got the first word of the title out of his mouth when I over-dramatically blurted out, "Thirty Five Dollars!" Everyone turned, kind of stunned. I pretended to be a serious bidder, and I was standing next to Jeb Rosebrook on the far side of the room, away from the bidding crowd. As the auctioneer regained his composure and moved along, he mentioned the book was autographed by the author, to which I yelled out, "Okay, ten dollars!" A mild murmur and a couple nervous laughs ensued. When the auctioneer tried to add some accolades to the virtues of the book, I yelled, "I'm sorry, but I'm going to have to cut that down to eight dollars!"

I thought it was all good fun and I ended up paying the full $35 for the book. Fast-forward to the above photo, taken the next day in the hallway leading to the history sessions. Mere seconds after this photo was snapped, a short, stocky, middle-aged man tugged at my shirtsleeve at the elbow, and said, "When did you stop being calm?"

It was an odd question but I could see he was dead serious. I laughed and said, "Sorry, but I'm not really a calm person." To which he said in a stern tone, "You used to be calm. What got into you, acting out like that?" I knew immediately he was referring to the bidding incident and so, I said, "Well, I'm sorry, but I was just having fun." He walked away with a satisfied look on his face, no doubt pleased that he had taken me down a peg, or two.

"Is he still talking to you?"
—Bruce Dinges, walking up to me after this exchange. He was referring to Hutton and my bidding war bit. I thought to myself, perhaps my morning-drive behavior is too much for these mainstream history types. It's true, I don't wear tweed coats and talk in somber tones. In fact I actually relate more to a different kind of performer and I concur in the job description: