Lorenzo Oatman Gets Brained And The Apaches Get Blamed

April 27, 2017
When we think of Indian attacks in the Old West, we invariably think of bows and arrows, and then, eventually, tribes get Winchesters and somehow the two get rounded up in a matinee symphony of death, punctuated by the whizzing of arrows and the Ryder Sound track bark of the rifles and the Ind-in's high pitched yells,  all melding into a Saturday afternoon double-feature cliche.

Last weekend I bought a couple hundred dollars worth of books in Flagstaff at the Arizona History Conference because I wanted to know more about one particular element of the Oatman story:

Corporal Rivera is standing outside the Perfect Conception church near Yuma Crossing when he notices several Quechan men enter the plaza. As the service in the church begins, three of the natives walk towards him holding out a bundle of wood. It appears to Rivera they are bringing a gift of firewood. So, the corporal steps out to receive the gift. The Quechans hand him the wood then pull their war clubs and bust open his skull, dropping him in the dirt, deader than a door nail. At the same instant a great war whoop signals an assault, as a horde of other Quechans pour into the plaza to attack and kill any Spanish person they can find, which they do, quite effectively, dispatching most of them with their trusty war clubs (I believe there is one shooting when a Cuechan utilizes a stolen Spanish rifle). It's known as the Yuma Crossing Massacre and the date is July 17, 1781.

Now, fast forward to 1851 and the attack on the Oatmans. Here is Olive's first person description of the attack: "Suddenly. . . a defeaning (sic) yell broke up on us, the Indians jumping into the air, and uttering the most frightful shrieks, and at the same time springing toward us flourishing their war-clubs, which had hitherto been concealed under their wolf-skins." 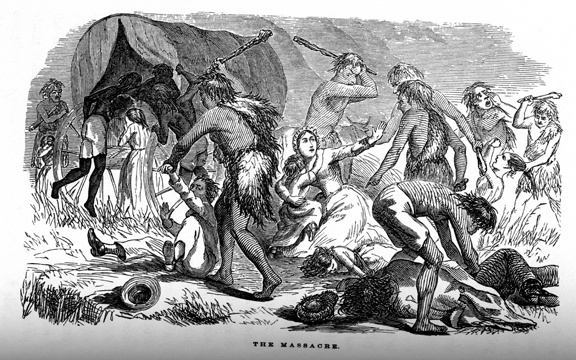 
This seems at odds with our popular beliefs about In-din armament. Where are the bows and arrows? Nobody has a knife?

Lorenzo Oatman continues the narration, "I was struck upon the top and back of my head, came to my knees, when with another blow, I was struck blind and senseless."

We don't really think about war clubs with the Apaches, who seemed, at least in the popular imagination, to prefer lances and bows and arrows. 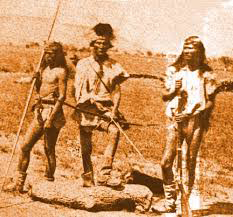 Okay, this just in from my Apache historian compadre Lynda Sanchez: 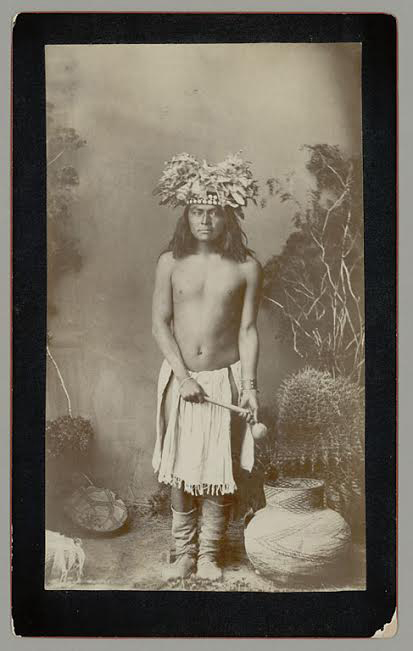 A Frank A. Randall photograph of "Caley in Native Dress" and holding a "skull crusher." Photo is from the National Anthropological Archives, Smithsonian Institution, SPC Sw Apache BAE 69-98, 02011200.

Lynda assures me that in addition to lances and bows and arrows, Apaches carried war clubs and utilized them every bit as much as the Mojaves, Yavapai and Quechans. Plus, for the photo, we need to credit Dr. Robert Watt from England, who is working on a book about Victorio and he is an expert on Apache weaponry. Thank you Dr. Watt!

Point of fact, if an arrow landed anywhere in Arizona during the 1800s it was presumed to belong to an Apache. This included the Oatman massacre with Tonto Apaches getting the blame (there's even a map in the book showing the location of the tribe that allegedly did the dirty deed). 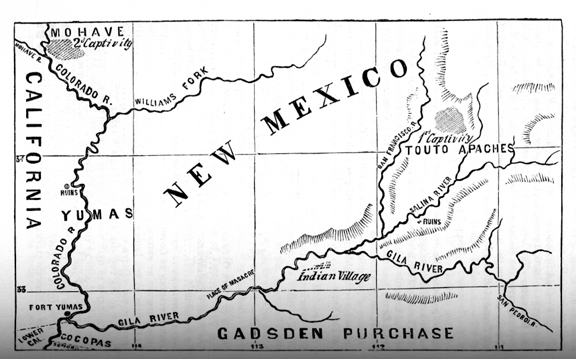 Map of attack and area of first and second captivity.

It was only recently, that author Brian McGinty, in his masterful book, "The Oatman Massacre,"  questions the Tonto Apache claim. McGinty argues persuasively that the attacking Indians were probably Yavapai, since the Apaches did not traditionally trade with the Mojaves, and that is where Olive and Mary Ann are eventually traded. And the Yavapai were often called Yavapai-Apache, so it is very confusing, but most historians now believe the attackers with the war clubs were Yavapai.

Unlike the etching, where it appears the Oatmans are being beaten with tree branches—carried by cave men—I assume the actual war clubs had a rock attached to the end? 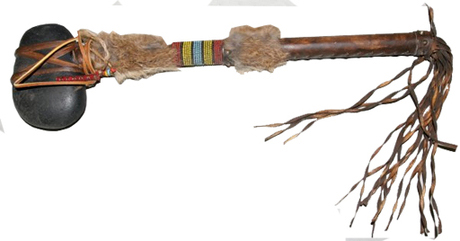 Either way, they must have had to really swing hard to put a grown man six feet under. Whichever Yavapai warrior had the assignment to brain the 14-year-old boy, Lorenzo Dow Oatman, he must not have had quite enough muscular, force power to finish the job.

Daily Whip Out: "Lorenzo Brained But Not Quite Drained"

Lorenzo's Incredible Testimony From The Other Side
Here is how Lorenzo describes what happened next: "I soon must have recovered my consciouness (sic) after I had been struck down, for I heard distinctly the repeated yells of those fiendish Apaches."

Lorenzo describes the pitiful shrieks and cries of his dying family members. He describes "coming to myself, with sensations as of waking from a long sleep. . .I could not move. I thought of trying to get up, but found I could not command a muscle or a nerve. I heard their preparations for leaving. . .two of the wretches came up to me, rolling me over with their feet; they examined and rifled my pockets, took off my shoes and hat in a hurried manner; then laid hold of my feet and roughly dragged me a short distance, and then seemed to leave me for dead. . .there seemed a light spot directly over my head, which was gradually growing smaller, dwindling to a point."

Coming next: we'll track Lorenzo's bizarre, psychedelic trip back to civilization. You can read it right here.
"When I was younger I could remember anything, whether it had happened or not; but my faculties are decaying now and soon I shall be so I cannot remember any but the things that never happened. It is sad to go to pieces like this but we all have to do it."
—Mark Twain