April  28, 2017
When we last saw Lorenzo Dow Oatman, 14, he and most of his family had been stuck down by Yavapai war clubs on a ridge overlooking the Gila River. Two of his sisters, Olivia and Mary Ann had been taken alive and he had been left for dead after being thrown off a cliff (or jumping himself to ward off the blows). 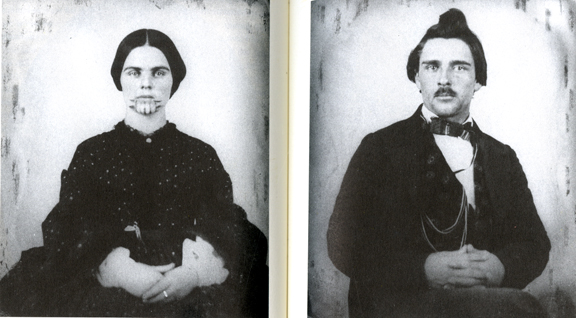 Olive and her brother Lorenzo photographed, probably on the same day, in 1856.

Five years later, he and his only surviving family member, Olive, sat for lengthy interviews with Royal B. Stratton, a charismatic Methodist minister and writer, who intended to tell their ordeal in a book, which ultimately became "Captivity of The Oatman Girls," a national best seller.

Here is Lorenzo's first person account of what happened to him after his attackers left him to die:

"I soon determined in my mind that I had either fallen, or been hurled down to my present position, from the place where I was first struck down." 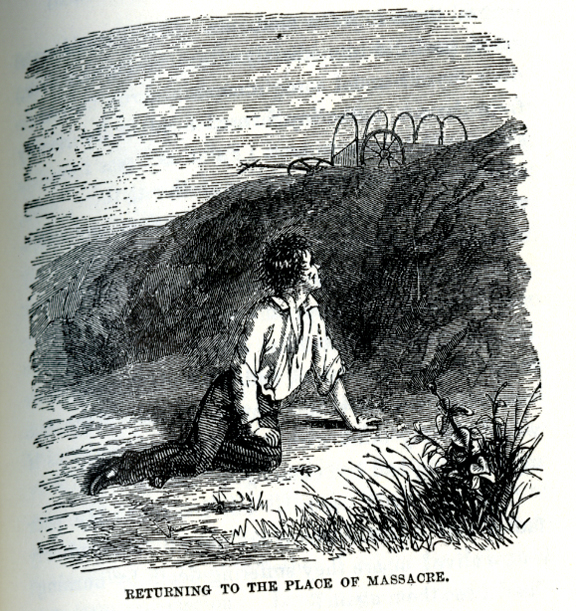 Lorenzo as illustrated in the "Captivity of The Oatman Girls"

A decent illustration of Lorenzo looking back up to the bluff where the stripped wagon stood. One nitpick: the wagon tongue would have been facing the other way, to the west, the direction they were traveling when they were attacked. 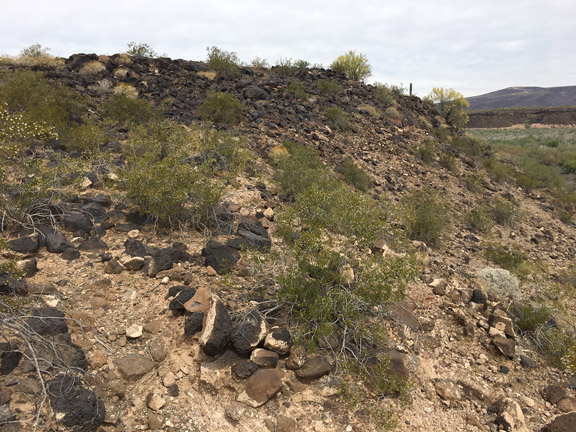 The actual ridge Lorenzo was looking up at.

"I thought at times (being, I have no doubt, partially delirious) that my brain was loose, and was keeping up a constant rattling in my head, and accordingly I pressed my head tightly between my hands, that if possible I might retain it to gather a resolution for my own escape. . .I had no strength to walk, my spirits crushed, my ambition paralyzed, my body mangled. . .I grew sick and faint, dizziness shook my brain, and my senses fled. . .I was conscious of emotions and thoughts peculiar and singular, aside from their relation to the horrors about me. At one time (and it seemed hours) I was ranging through undefined, open space, with paintings and pictures of all imaginable sizes and shapes hung about me, as if at an immense distance, and suspended upon walls of ether."

Eventually he stood to walk, but not far, before passing out again. He was harassed by wolves, who he said, came right up him. One can only imagine their morbid delight in finding the smorgasbord on the ridge. When someone finally went out to see about burying them, they found bones and body parts strewn all over the flats atop the bluff.

Heading east, Lorenzo retraced the family's route in the direction of Maricopa Wells. On the afternoon of the second day after the attack two riders approached from the Pima villages and they gave him a little food and water. With some effort and help, Lorenzo returned to the Pima villages. He finally reached Fort Yuma on March 27, 1851, over a month after the attack. He was treated by the camp physician, Dr. Hewit, who not only took the boy under his wing, eventually the doctor took Lorenzo with him to San Francisco, where they arrived on June 26, 1851. Bouncing around California from there, Lorenzo never gave up hope of finding his sisters and he was eventually reunited with Olive back at Fort Yuma, exactly five years and four days after the fateful attack on the Gila.

Quite a lot had happened to Olive in the interim and much of it is shrouded in mystery and conjecture, but it is a story which I plan on telling in graphic detail. Why? Because I am motivated by the following sentence:

"Much of that dreadful period is unwritten, and will remain forever unwritten."
—Royal B. Stratton

I am also inspired by the advice a certain songwriter gave to John Mellencamp:

"Go where they aren't."
—Bob Dylan