April 10, 2017
We are doing a cover story on Slim Pickens and, in my editorial, I want to relate a story of how so many different people had a story about meeting him, including me. Slim actually critiqued one of my first oil paintings back in 1976.  Here's how that happened: 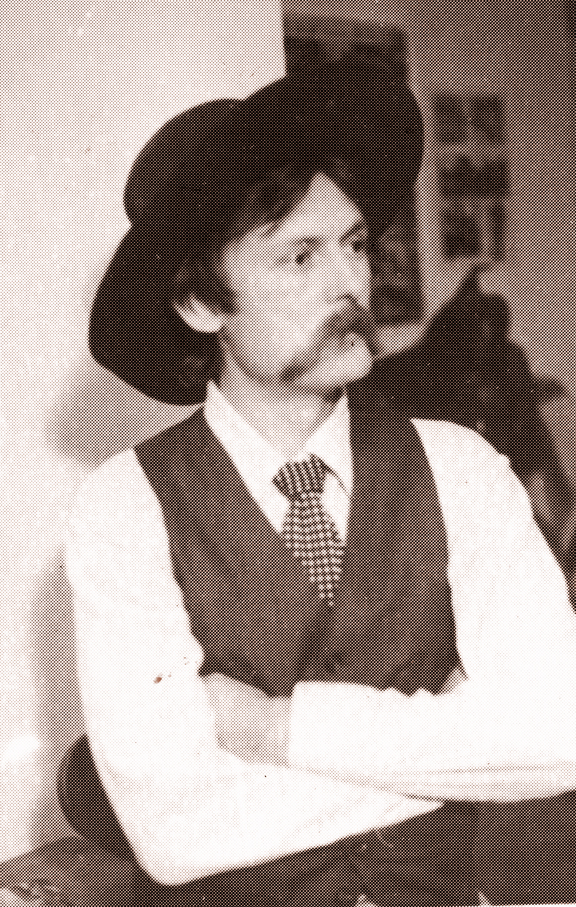 During the runnup to our nation’s Bicentennial I got it in my head I was going to be a Cowboy Artist. I had toyed with the idea before, but with all the hoopla of 1976, I made a commitment to do something Western worthy. Sticking close to my upbringing in Mohave County, I created an oil painting called “Hualapai Roundup.” It took me a couple weeks to execute and when I was finished I realized I needed some professional feedback so I called up an art gallery on Campbell Avenue in Tucson and asked if I could bring the painting in for an evaluation and critique. The owner said yes, to bring it by as he was closing and now would be a good time. So I loaded the big painting in my ‘74 Pinto and drove over there. The gallery was actually in an old house, and when I came in the front door, I saw this gangly cowboy sitting on a couch by the door and damned if it wasn’t Slim Pickens!

I believe he was in town filming HAWMPS! at Old Tucson.  It was a film by Joe Camp, the man behind the BENJI movies, and Slim co-starred with James Hampton—Dobbs from F-TROOP—and Christopher Connelly and Denver Pyle.  It was a Western family comedy about trying to introduce camels into the U.S. Cavalry and one I recently rented to poach camel shots for my Beale paintings.

Slim couldn’t have been nicer and he ended up critiquing my painting, giving me pointers on bovine anatomy (“that cow at the center is a little short in the hind quarters”) and roundup job nuance (“Why are those four riders back there jawin'? Git to work!”). He made me laugh, he was very positive and he encouraged me to keep going. 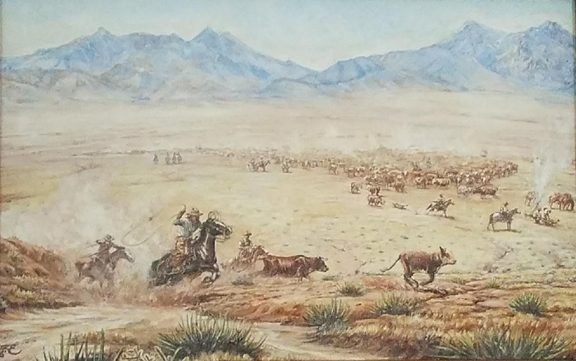 My mother had this painting for many years in her home in Cody, Wyoming. After her passing, in 2004, it returned to me and I finally donated it to The Kingman Regional Hospital—for saving my life—and to help raise money to buy defibrillators to save more lives. A silent auction was held at the Kingman Fairgrounds and the painting was bought by Tommy Grounds Upton, who is the daughter of one of the cowboys who worked the roundups portrayed in the painting.

This oil painting now hangs at Upton’s Hidden Pines Bed and Breakfast outside Kingman. The B&B is off I-40 at Exit 59, right on DW Ranch Road, at almost the exact spot of where the round up in the painting takes place.

"An artist cannot fail; it is a success to be one."
—Charles Horton Cooley