What Exactly Did The Blue Tattoo Lines On Olive Oatman's Chin Signify?

April 11, 2017
When Olive Oatman was returned from her five years of captivity among the Yavapai (one year) and Mojave (four years), she gravitated, along with her brother Lorenzo, to northern California where she came under the care and influence of a minister named Royal B. Stratton. The clergyman wrote up their experiences for a book, which became "Life Among The Indians."

Stratton, of course, had cleaned up Olive's story. And then some. He took out all of the Oatman family's religious affiliation. The Oatmans were Brewsterites, an off-shoot of The Church of Jesus Christ of Latter-day Saints, at a time when Brigham Young was staging a mass migration to Utah. The Brewsterites were on their way to The Land of Bashan, which young Colin Brewster, age 21, prophesized was a veritable Eden, located at the confluence of the Gila and Colorado rivers (today known as Yuma).

Stratton also removed any reference to any sexual shenanigans among the Native peoples. According to Olive (as coached by Stratton) she wrote, "to the honor of these savages let it be said, they never offered the least unchaste abuse to me." It must also be said, that at the time she was with the Mojaves, Olive was 15 and she spent four  years with them. 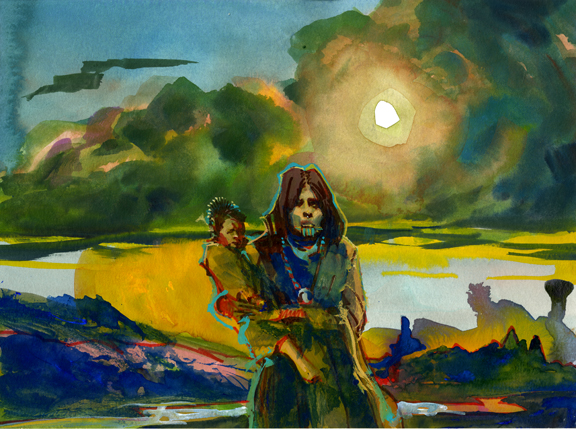 Daily Whip Out: "By The Light of The Mojave Moon"


Scholars and historians have argued ever since about Olive's status among the Mojaves. Was she a slave, marked as personal property by the blue, vertical tattooed lines on her chin, so she could be retrieved if she tried to run away? Olive and Stratton made this case, while others say she was tattooed because she was a member of the tribe.

Or, could there be another reason for the blue, vertical lines? A U.S. expedition, led by Lieutenant A. W. Whipple arrived in the Mojave Valley in February of 1854 to explore a possible railroad route through the area. Here is what Whipple wrote in his daily report:

"The young girls wear beads. When married, their chins are tattooed with vertical blue lines, and they wear a necklace with a single sea-shell in front, curiously wrought."