April 25, 2019
Okay, I lied. I have to do more Billys because I want it to be good, and the whole thing is not quite there yet. In my defense, I once read Maynard Dixon did 85 versions of a drawing before he was satisfied. So, based on that yardstick, I'm not even half way there. Close to half, which seems ridiculous, but there you go.

To give credit, where credit is due, I got this unsolicited email two days ago: "I like the attached image of Billy the best from your blog." 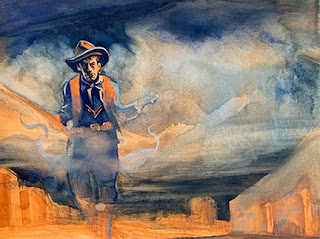 "He looks, Billyish and dangerous, daring all comers with his angry stare.  Between the swirling gunsmoke and swirling clouds this illustration has a sort of dream-like/mythical mood I find appealing.  I really like the composition and coloring but would suggest a bit more southwestern detail to a few of the buildings.  Final thought, April, May and June TW are predominantly brown covers.  Time for some blue, as in Billy's clothes and that stormy, deep blue swirling sky?  I think this image should be used somewhere.

"I know you need my unsolicited, amateurish two cents worth like Billy needed Pat Garrett.  No need to reply."
—Frank Puncer

I appreciate the encouragement Frank. Thanks to you, I got up this morning and give it another go: 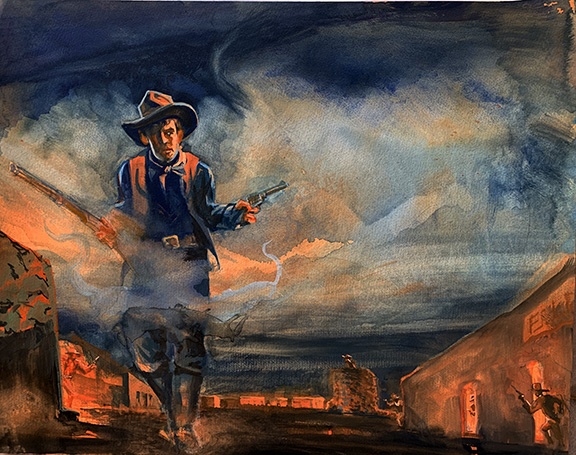 "Billy Walks The Most
Dangerous Street In America"

"The idea is to die young, as late as possible."
—Old Vaquero Saying