CGs Galore Plus The Fate of Little Dick Liddil

I've got a gut feeling we're on to something. All last week and today, my production manager, Robert Ray, and I have been going back thru past issues looking for all the Classic Gunfight articles that have run in the magazine but were not published in our series of books: CG1, CG2 or CG3. So far, we have tabulated 72 new gunfights that all together, run to 230 pages. 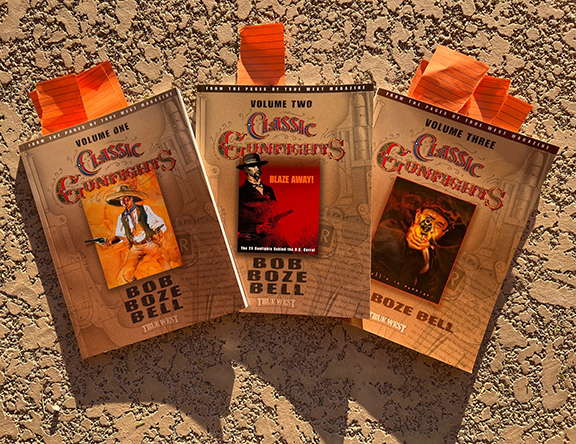 CGs In A Row

That is a bunch of quality coverage of all the Classic Gunfights in The Old West. I think it's going to stretch to five volumes and maybe even more. I didn't set out to make it my life's work, but I knew it would be fun to do because I love the stories and the characters and the ridiculous things they did.

A CG to Remember

We taped a new BBB YouTube video today about one of those CGs featuring the "dirty little coward who shot Mr. Howard and laid poor Jesse in his grave." What a bizarre, grotesquely domestic ending to one of the most legendary outlaws of the American West. Robert Ford was in cahoots with his brother Charlie and another member of the James Gang, Dick Liddil who killed Jesse's cousin Wood Hite and quickly buried him, turned himself in and ratted out the gang. When Jesse saw Liddil's name in the newspaper, he smelled a rat and Ford allegedly killed his hero before James could kill him.

So What Happened to Little Dick Liddil?

After the death of Jesse James, Dick Liddil went west. He and Bob Ford pooled their meager reward money (they got mostly stiffed on the promised $5,000 Reward) opened the Bank Saloon on Bridge Street in Las Vegas, New Mexico, not far from where Doc Holliday had a saloon several years before and cattycorner down the street from where Billy the Kid was incarcerated in December of 1880. Liddil and Ford quickly went bust, but then Liddil leased the billiard room in the new Plaza Hotel and Ford became a city policeman. Liddil later found his true calling and ran a string of horses for J. W. Lynch of Las Vegas and they raced horses on the east coast racetrack circuit. Liddil died of a heart attack at a ractrack in 1901. He was 49.

Robert Ford opened a tent saloon in Creede, Colorado and a Missourian, "Red" O'Kelley, some say seeking to revenge Jesse, walked in with a shotgun and said, "Hello, Bob," and pulled both triggers. Ford was 30.

Admit it, you kind of had a gut feeling that karma was going to come back around, didn't you?

"A gut feeling is actually every cell in your body making a decision."