Eureka! I Filmed it! 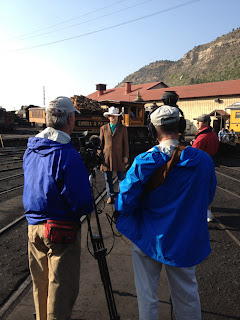 Here I am in front of the Eureka steam locomotive, built in 1875 and in use in Nevada one year before Custer's Last Stand. Sucker weighs 44,000 pounds and is in perfect condition. They had the steam engine on the roundabout and it turned behind me as I gave the history of steam engines in the West.  After this shot, the owner of the train allowed me to get up in the engine as we chugged through the rounrhouse and coupled with two cars and a caboose. The little boy in me was in the clouds. Much fun. Filmed four other Moments on the Presidential Train to Cascade and back.