August 18, 2012
Big rainstorm yesterday afternoon in Durango. Wiped out our celebrity fast draw competition but it was fun hanging in the True West Railfest tent and listening to the rain beat down on the canvas. Cleared off about about three and we Zonies enjoyed the cool afternoon (this is bliss for a desert rat).

Last night I had the pleasure of meeting actor Charles Diercup, who played Flat Nose Curry in "Butch Cassidy & The Sundance Kid." We aired the film outside the Durango depot at 8:30 as part of our True West Railfest festivities. I introduced the film and Charlie. We watched the film at the back of the amphitheater and he told me several funny stories about the making of the film, which we'll use in True West. 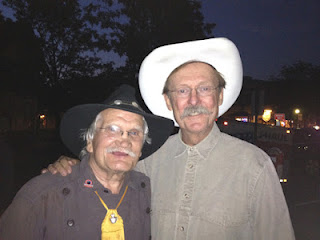 At six, Ken Amorosano, Sheri Riley and myself joined Paul Andrew Hutton and his son Paul Andy at Seasons Restaurant for a fine meal and then we retired to the Office Bar next to the Strater Hotel to tell more lies.

Big day today on the special presidential train. The Westerns Channel is here and we're filming new True West Moments on the ride up to Cascade and back.

"You keep thinkin' Butch. That's what you're good at."
—The Sundance Kid (Redford) to Butch Cassidy (Paul Newman)
Posted by Bob Boze Bell at 5:34 AM