April 15, 2016
Staying at the Hilton Gardens in Yuma which is at 310 Madison (get it? 3:10 to Yuma?). We are here for the Arizona History Convention. Of course, this is the home to several of my heroes. 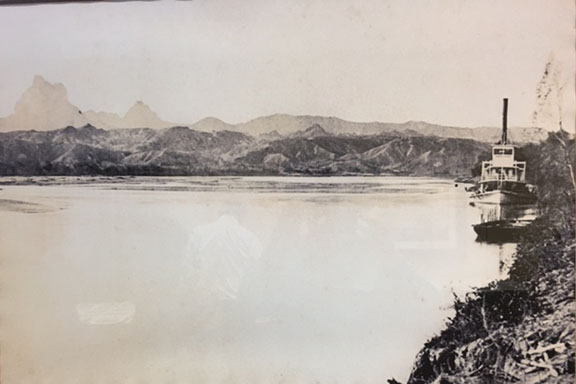 A steamboat (the Cocopah or the Mohave) on the Colorado River near Yuma, Arizona Territory.

Walked around the neighborhood in oldtown Yuma after lunch today and saw the homes of my steamboat heroes Jack Mellon and Isaac Polhamus (who had one of the oldest houses in Yuma, dating to 1869.) I was asking a historian if I could see the steamboat world of that earlier era along the river and she said, the Colorado River runs so much lower today because of all the dams, consequently that world—the docks and supporting equipment—is too high, and long gone. Makes sense. Here's a scene we see right out our widow, although it's an earlier view of the hell hole described in every Western about Arizona prisons ever filmed: 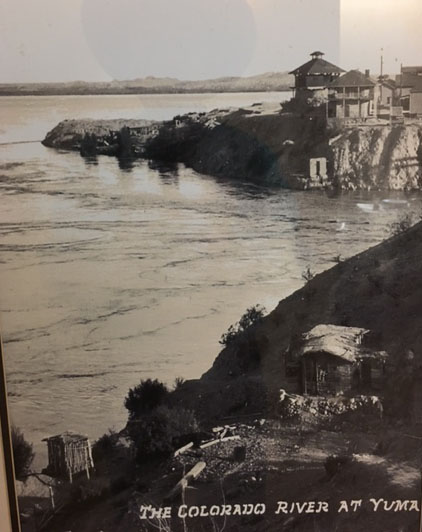 The Yuma Territorial Prison on the point where
the Gila River drains into the Colorado River.

Stuart Rosebrook and I introduced the original "3:10 to Yuma" film last night in the main auditorium, talking about the various Arizona locations where it was filmed. They used Elgin (down by Sonoita, AZ) for all the train stuff, then cut to Old Tucson for a scene of the outlaws riding into Contention, then they cut this together with the same guys arriving at the hotel, which was shot on the Warner Brothers back lot in Burbank. It is seamless in the cutting and they go back and forth throughout the movie. The only false note is a Western town outside of Sedona, which stood in for Bisbee. The movie was shot in 1957 and was a joy to see again after all these years. I first saw it on a student council trip from Kingman Junior High School when I was representing my school at a convention in Phoenix and our principal Blaine Benson and our sponsor, Mrs. Plumber, accompanied me, Jeri Penrod and Rick Ridenour to see a movie at the Fox Theater in downtown Phoenix and they were playing "3:10 to Yuma" and I remember being mortified when Glenn Ford, being held a prison in the hotel, wiggled around on the bed and said, when the bed squeaked, "Must be the bridal suite." Seeing that with them freaked me out. Too crazy with that sex talk and your junior high teachers in tow. 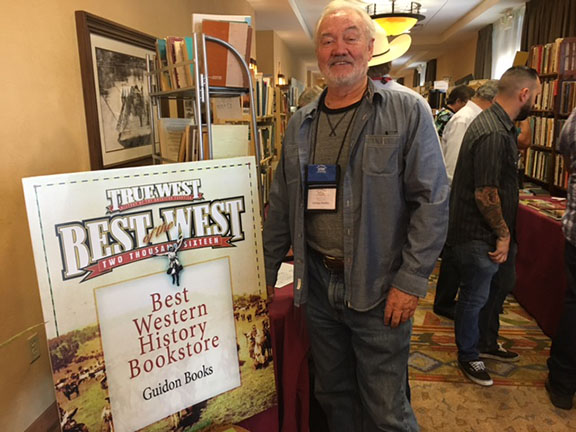 One of the booths at the convention specialized in Wyatt Earp books and he had this on his table: 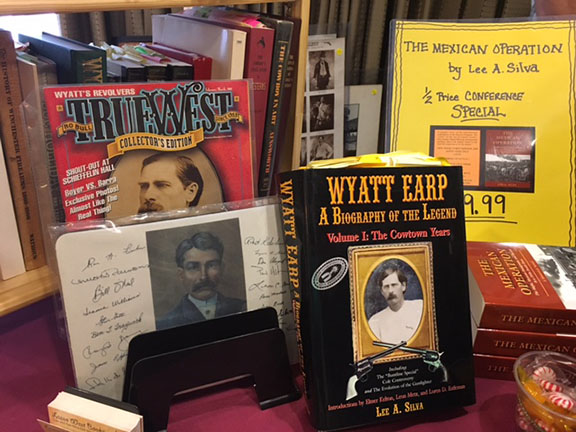 This Wyatt Earp issue, January-February 2001 of True West sells for $300. When I walked by the booth and said hi, someone said, after I had passed, "He's the guy who called Wyatt Earp a pimp" It wasn't for my ears to hear, but a historian friend of mine told me later, with a laugh.