April 28, 2016
I got rear ended by an old fart at School House Road and Cave Creek Road yesterday. Earlier that morning, I had just finished reading "When Breath Becomes Air," a book about a Kingman kid who died too young. I first heard about this New York Times best seller at my art opening at Cattle Track back in early March. A woman took a look at my book "The 66 Kid" and said, "You must know the author from Kingman who wrote 'When Breath Becomes Air,'" and I admitted I had never heard of it, or the author.

In the Seattle Airport last Sunday I bought a copy of the book at Hudson News and read most of it on the plane ride home. Of course, I had to fight back tears at least five times in the first 100 pages. It is a very sad and sobering read—Paul Kalanithi describes as only a doctor can, what it's like to die of cancer, at the tender age 36. So, needless to say, having just finished the book, Wednesday morning, I was in a funky mood on my way into work. Speeding up Cave Creek Road. I was late for a meeting at the office, so I careened by an old fart in the left lane, passing him on the right. As I glanced over at him, I thought to myself, "Pay attention. This could be your last morning on earth and this is the guy who just might do you in."

As I shot by him, I noticed a woman up ahead, walking a small dog, crossing at the stop sign at School House Road. There is not a crosswalk there, but I realized she was going to impede my Texas Leaguer hop through the intersection, so I quickly turned into the left lane so her slow walking wouldn't impede me. And that's when the old fart ran right into the back of me. 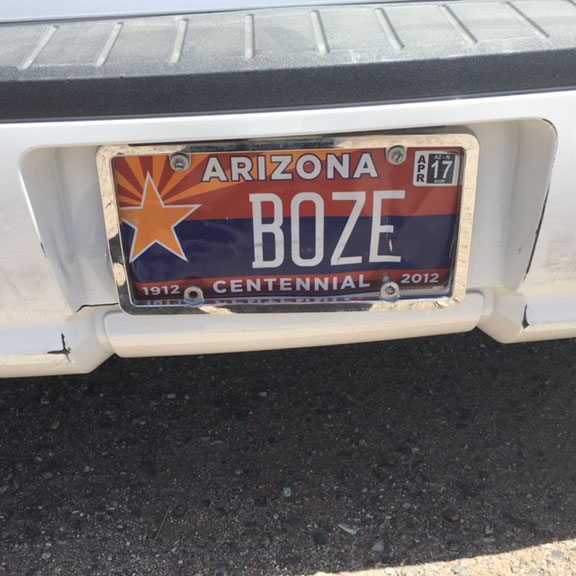 The Geezer And The Damage Done


I got out to inspect the damage: he had buckled my Boze customized license plate and bruised the plastic bumper in a couple spots. The old geezer (he was probably at least six months older than me), was slow getting out, and I said, "What happened?" He said, "I didn't know you were going to stop," and I said, "Well, there is a stop sign here." He sheepishly said, "I'm sorry, I didn't see it." Which took a lot of the sting out of my anger, so I said, "I'm going to live with it," and, rather than wait for his insurance card and the police I got into my car and sped on to the office.

So, that was the good encounter with a ramming old Man.

Two hours later, I'm circling Terminal Four at Sky Harbor Airport and I get a text from Paul Andrew Hutton saying, "just landed." Well, he was supposed to be on the northside of the terminal at 11:30 and it was 11:28, so I fought my way around the terminal, and down to the cell phone lot, which is two terminals away and perhaps five minutes—in heavy traffic—from Terminal Four.

Some seven or eight minutes later, I get another text: "I'm on the north side, door #4." So I took off, fighting my way back into traffic, slugging it out to make it past Terminal Three and back to Terminal Four (100,000 people fly in and out of here daily!). I pull up to Terminal Four Arrivals, door number 4 and there is no Hutton. I look frantically around and decide to get out and open up the back so I can stall with the airport security folk. As you may know, "Keep moving! Keep moving!" is their constant refrain. I kept looking for Hutton as I opened the rear door on the Flex and all of a sudden I hear this loud blast of a horn right behind me. I jump and look back over my shoulder and see Old Man #2, who has blasted his horn to warn me he is going to squeeze by me on the right, between me and the curb. Without even thinking, I took two steps to my right, and as he slid by me, I slammed the heel of my hand against the driver's side window and yelled, "Don't you honk at me you intelligent and sweet old man!" Full disclosure: I might have added something about his IQ and his mother, I don't remember. I was too mad.

Well, the old man didn't like this and he opened his car door and got out, but instead of getting in my face, he started yelling, "Help! Police! This man is attacking me!"

I tried to calm him down, but he wouldn't stop. "I want the police! He almost broke my window. " Finally, turning to me he said, "You'll be sorry you messed with me." To which I said, "Well, you've already got your wish there."

I went back to my car and got inside. A black woman security officer came around to me and said, "Are you Bob Boze Bell?" And I said yes, and she smiled and said the irate codger has insisted on the police showing up. "So," she said with some warmth (she was very sweet actually), "you need to come over here and wait." So I did. About this time Hutton calls on his cell, "Where are you?" "I'm at door #4," I say, before adding, "But now it looks like I'm going to jail." Turns out the number 4 is over every single door and represents Terminal 4 and that both of us were at the wrong door (Hutton was at door # 6).

By this time I had calmed down and apologized and reached out my hand to shake. "I'm not shaking your hand," he said, his lower lip quivering, "you are a fool." I don't know why, but I said, "How old are you?" He wouldn't tell me, but insisted he was older than me. Two police officers showed up and took a statement from him: "He attacked me. He could have broken my window. It was very loud." The policeman said calmly, like he was talking to a child, or an old man; "Is your window broken?" "No, but it could have been." The cop looked at me, "And your version?"

"He honked at me, I overreacted and slammed my hand into his window and I'm sorry." I reached my hand out again to shake, but he wouldn't take it.

Two hours later, I posed for this photo with Juni Fisher and Paul Hutton at the Scottsdale Museum of the West: 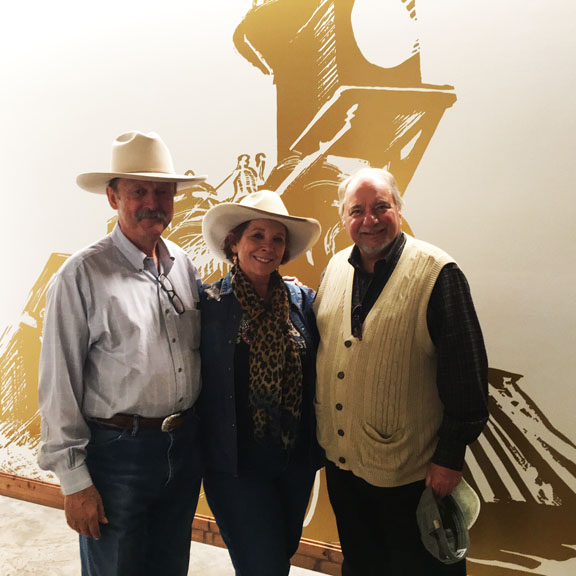 "Even if you are perfect, the world isn't."
—Paul Kalanithi, Kingman boy