October 17, 2016
It's our last day on the island. Got to see most of Kauai—the garden island—including the rugged, northwestern quadrant where there are no roads and very little rain. 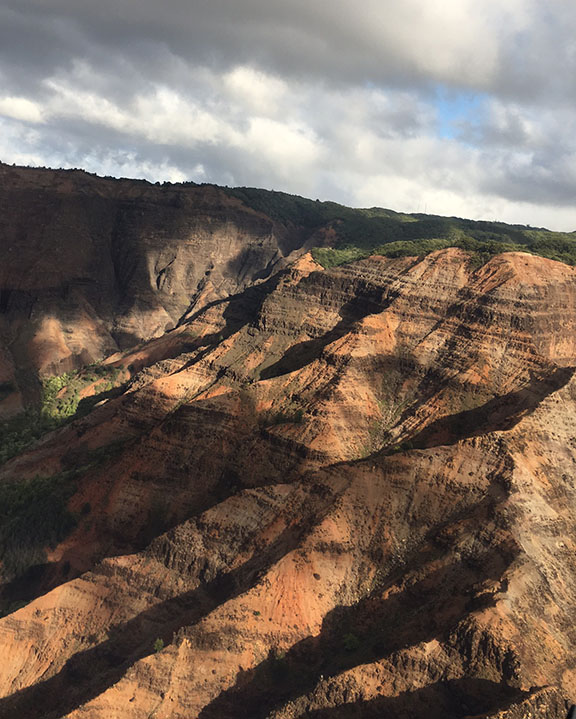 According to our sea faring guide—Captain Aaron—Mount Waialeale is the second wettest spot on earth receiving more than 460 inches of rain per year and the westside of the island gets a meager 14 inches of rain, which is darn close to Arizona (we usually get about 12 inches a year). That's why the western part of the island resembles Arizona, above, and the eastern part looks like, well, Hawaii: 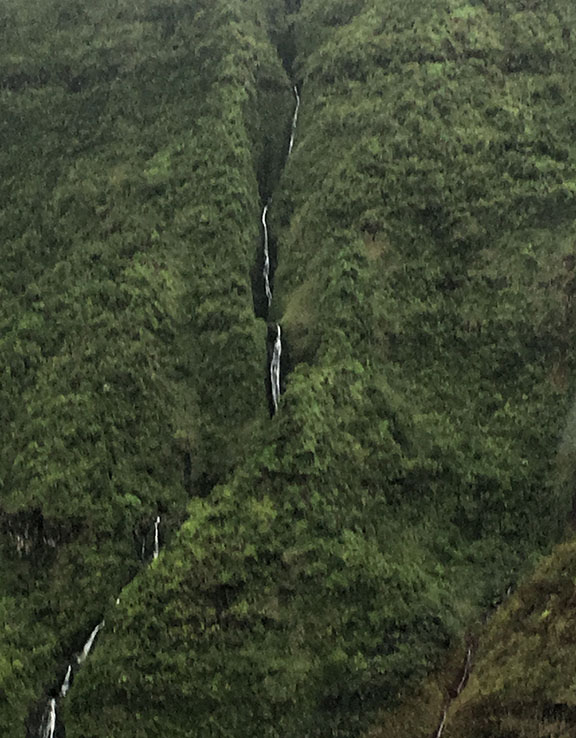 Waterfalls galore on the northeastern mountains

Many movies have been made here: South Pacific King Kong, Pagan Love Song, Raiders of The Lost Arc, Diamond Head, The Hawaiians, Six Days And Seven Nights, The Perfect Getaway, the list goes on. 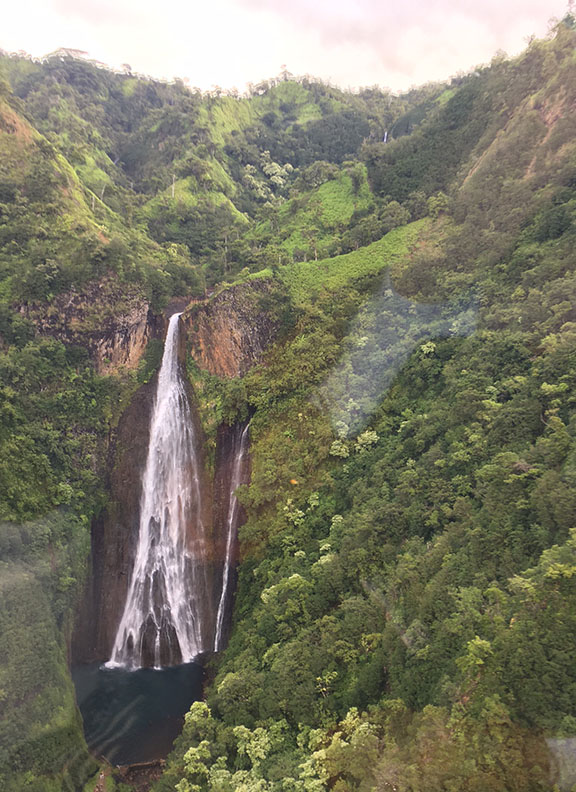 The waterfall used in the first Jurassic Park 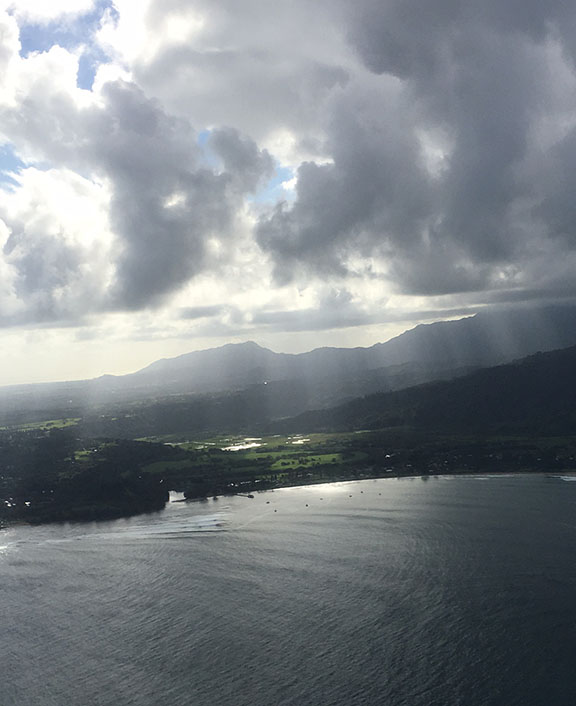 That's our condo, the white spot at far left as we glide over Hanalei Bay.

Yes, the Hanalei Bay made famous in the Peter, Paul and Mary song. And here's the view looking back the other way: 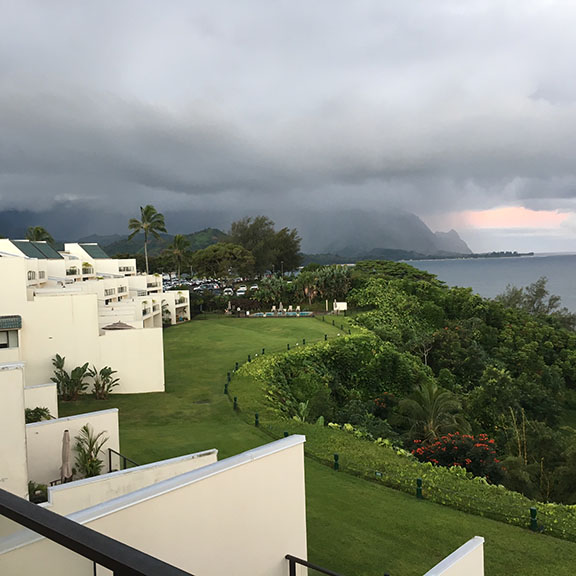 The view off our deck.

On Friday we took a helicopter tour of the island and I got to witness this spectacular view out of the front window of our Bell (no relation) Helicopter. 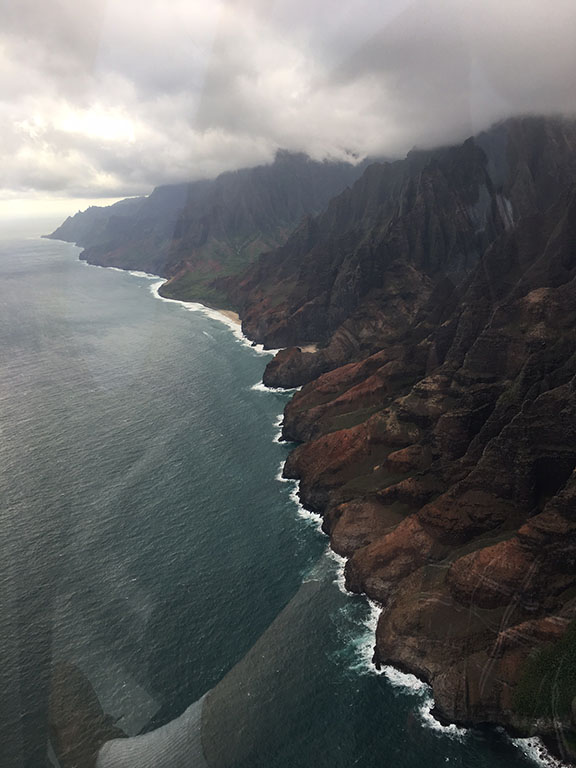 Na Pali Coast, the rugged northwest corner of Kauai where there are no roads.

First we flew over the "Barking Sands" and then, on Sunday, Kathy booked us on a swift boat, which zipped along the above coast bouncing over the waves like a Navy Seals extraction boat. And, according to our crew, that is what our boat is—a Navy Seal Extraction Boat.

Our trip took off from Waimea Bay, which is, of course, famous for its 50 foot waves and for being in the lyrics to "Surfin' USA" by the Beach Boys. It took us an hour-and-a-half to get to the boat dock from our Princeville address, but the drive was delightful as we motored through the mid-land farms and villages to get to the arid west side of the island.

The swift boat tour took off at ten and for most of the ride, I sat in the back in one of the three Princess Chairs (the crew has a rougher name for the chairs, that being the anatomical area Donald Trump allegedly grabbed with abandon back in the 80s). But the position did give me the opportunity to use my camera: 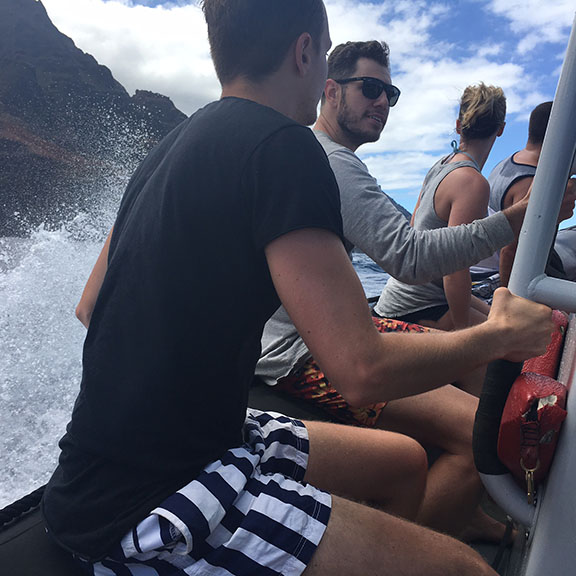 My fellow swift boaters hanging on for dear life.

Being the oldest pussy, I mean, GUY, on the boat did have its advantages. Less spray, less kidney punishment and more relaxation. After an hour of salt spray and wave jumping we arrived at the first of several sea caves and much to our amazement, Captain Aaron turned the boat around and BACKED into the caves, even as waves crashed into the surrounding walls which lifted the boat up near the ceiling in the smaller ones. 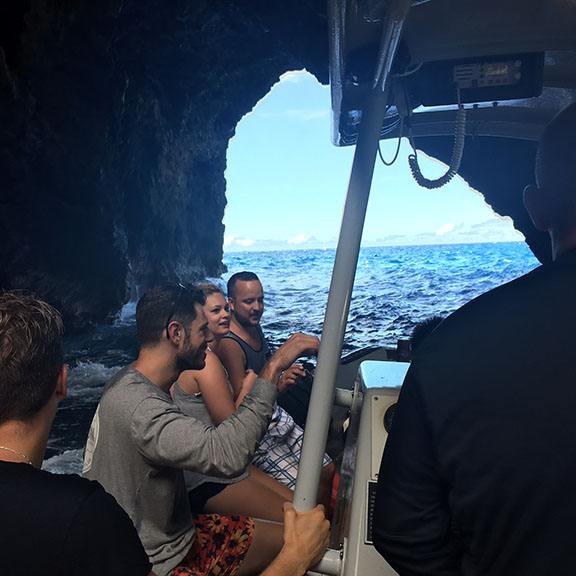 The view from inside one of the larger sea caves.

The water along the shore is a crazy blue. A kind of hot turquoise that looks fake. And, speaking of fake, the locals have little nice to say about the hippies, who first infested this region in the early seventies. According to our native guide, the national guard had to come in and round them up and deport them. He said they found 1,000 hippies living off the land and 20,000 cubic feet of garbage. He also added that the wilder bands are still out there in the canyons. Shades of the Apaches in the Sierra Madre! 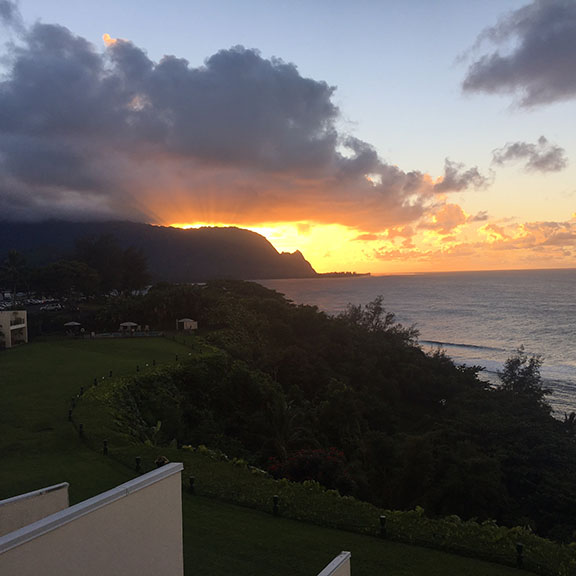 Another ho-hum sunset in the land of spectacular sunsets

So that's the report. I didn't talk about the kayaking but that's another story. It's expensive in this paradise. Gas is $3.50, a burrito is $9, the helicopter ride was $650 and the Captain Andy Boat Tour is $280. I'm not complaining, just reporting the facts. And as for the overall expense, I have to say this: