October 28, 2016
I had the honor today of addressing the John J. O'Connor Humor Forum at the Rotary 100 luncheon at the Phoenix Country Club. I was somewhat intimidated because Sandra Day O'Connor, and two of her sons—Scott and Brian–were sitting right in front of me, so I had to be good. 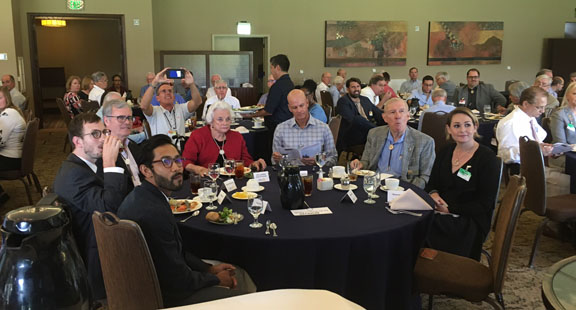 Retired Justice Sandra Day, in red, with two of her sons, Brian,
to her left and Scott to her right.

Here are a few of my remarks:

We are gathered here today to honor and celebrate the humor of John J. O'Connor III. He loved humor. He was a successful lawyer who often used humor to help litigants get past their objections. At the same time he loved lawyer jokes: How do you get a lawyer out of a tree? Cut the rope.

Now, I must warn you, this is a forum, not a speech, or a stand-up routine by me. We are here to discuss humor, to study it and to celebrate it. If you feel the urge, please raise your hand and I will gladly yield the floor and you may regale us with a joke that John often told, or, that he might like.

John raised three sons to appreciate good humor: Scott, Brian and Jay. And with the possible exception of Scott, the oldest, he did a good job.

Perhaps this is a good time to discuss what humor is. Sid Caesar claimed that "tragedy is when I cut my finger, comedy is when you fall into an open sewer and die."

Steve Martin describes it this way: "Comedy is the art of making people laugh without making them puke."

Some humor is quite subtle: "A gentleman is someone who can play the accordion, but doesn't."
—Tom Waites

I believe John would maintain that America is strong because Americans like to laugh. And, as Americans, we find humor in almost anything. When I was a kid, no one thought newspaper headlines could be funny. Thanks to the Onion, sarcastic headlines sometimes have more truth in them than real headlines:

HISTORIANS DISCOVER CHILDREN'S MENU ON BACK OF U.S. CONSTITUTION

CONCERT RUINED BY GUY ENJOYING HIMSELF 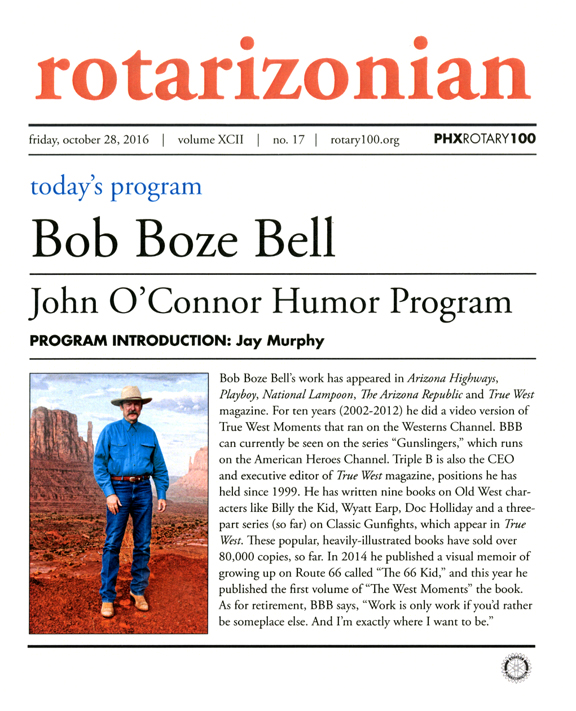 On The Road Humor
No forum on humor would be complete without talking about legendary Zonies who did very funny things. One of the funniest in my estimation is "Rimmy" Jim Giddings, who owned a gas station on Route 66 back in the day. Giddings was, as they used to say, "a handful," and, being a member in good standing of The National Order of Boneheads (I'm not making this up) he was known far and wide for doing mean things to tourists. Up and down the legendary two-lane blacktop, running from Flagstaff to Winslow, Rimmy abused tourists. For one thing he didn't have a sign that said, "Clean Restrooms." This is because his gas station, at the entrance to Meteor Crater, by the way, only had a two-holer outhouse perched on a hill, far away from the gas pumps. When he would get grief from woman about this inconvenience, he would just smile and wait until they had completed their trek to the outhouse and then give them a minute, or two, before going into the luberoom where he had a microphone set up, with a wire that ran to the outhouse, connecting to a speaker underneath both seats. After enough time had lapsed for them to start doing their business, Rimmy would say loudly into the microphone "Hey, lady, I'm trying to paint down here!" Invariably the door would burst open and a very flustered woman would scramble back to the car, fumbling with her undergarments on the way.

For some reason, this makes me proud to be from Arizona.

I think we have proven here today that the best audience is intelligent, well-educated and a little drunk.

Yes, John O'Connor was a Humor Master. He excelled at the art of humor and it made him a happy man, a happy husband and a happy father. We should all strive to be more like John. And long may the jokes flow from this hallowed ground.