October 26, 2016
Little Robert Allen Zimmerman of Hibbing, Minnesota grew up and stole from everyone, yet he somehow made the stolen loot his own. Now he has robbed from a gang of "writers," and everyone's panties are in a wad. 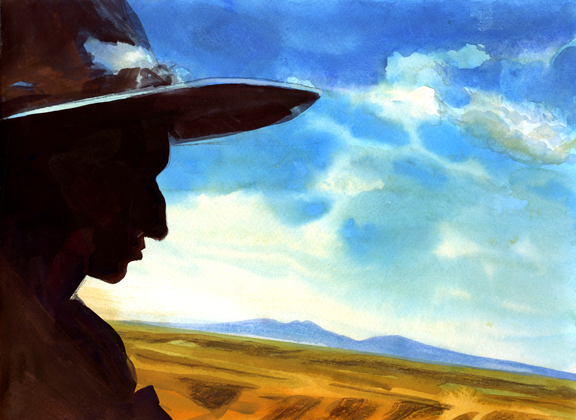 Daily Whip Out: "The Nobel Outlaw."


We are considering a cover story on Robert Allen Zimmerman, since he is receiving a Nobel prize for literature. Bob, as he's called in the biz, is famous in our corner of the history world because of his soundtrack for "Pat Garrett & Billy the Kid." As the years have gone by, the movie has faded a bit, but the soundtrack, which the director, Sam Peckinpah, did not like and took out of his cut of the movie, has only increased in stature. At least to my ears. The music gets better every time I hear it but the movie looks more and more like the product of the times it was made in.

Not everyone agrees with me. Half my staff thinks I'm crazy to even put him in the magazine, much less on the cover. We shall see where that Kid Krazy idea goes.

In the movie, Dylan plays "Alias" which is, I believe a character in the Walter Noble Burns book, "The Saga of Billy the Kid." He's not particularly good in the part and as far as I know, he never acted again. He was also ripped pretty hard for the music. Here's a few selected comments from a scathing record review in Rolling Stone (1973):

"The original soundtrack of Pat Garrett & Billy the Kid is an extension of its myth-destroying predecessor Self-Portrait, a record which further eliminates the possibility of anyone placing Bob Dylan on a pedestal. It is every bit as inept, amateurish and embarrassing as the earlier album. And it has all the earmarks of a deliberate courting of commercial disaster, a flirtation that is apparently part of an attempt to free himself from previously imposed obligations derived from his audience."

This take down, is written by Jon Landau (later Bruce Springsteen's manager) who also accuses Dylan of "playing with sometimes manifestly inferior artists," and the result is that Dylan is "redefining himself as limited and not terribly relevant." Landau also rips into the various song versions on the album, "Billy No. 1,' 'Billy No. 4' and 'Billy No.7" (thank God he spared us all the Billys in between). . ." before attacking Dylan's "rambling rhythms and undisciplined and flat vocal style."

Really? This is news? In a magazine that touts on the cover, "All the news that fits"?

Landau ends with this classic gem: "Bob Dylan has once again broken the mold, only this time, with the least acceptable method available to him, an album neither exceptional, nor truly different, but merely awful."

The irony, to me, is that while it's all basically true, I still love this album and play it often on road trips, because it takes me to a place I want to go, which, when you think about it, is the true measure of art. As for little Bobby Zimmerman, long may he rob.

"To live outside the law you must be honest."
—Bob Dylan
Posted by Bob Boze Bell at 10:10 AM