October 9, 2016
We drove out into the Alabama Hills one more time today and took a look around. Paige Williams took this photo of me standing under a leaning boulder, with Mount Whitney looming over my shoulder: 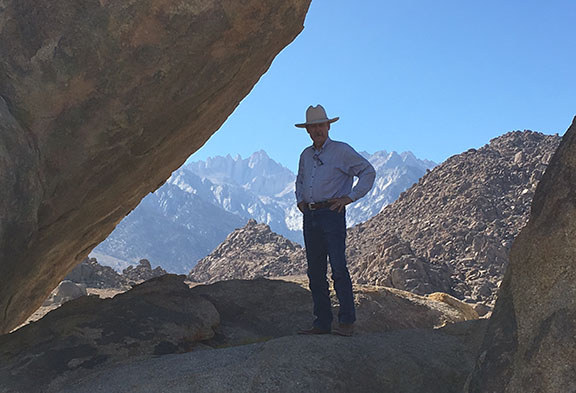 BBB In The Alabama Hills

Needs a little dodging in Photoshop, but it's a cool shot. She also took one with me kneeling: 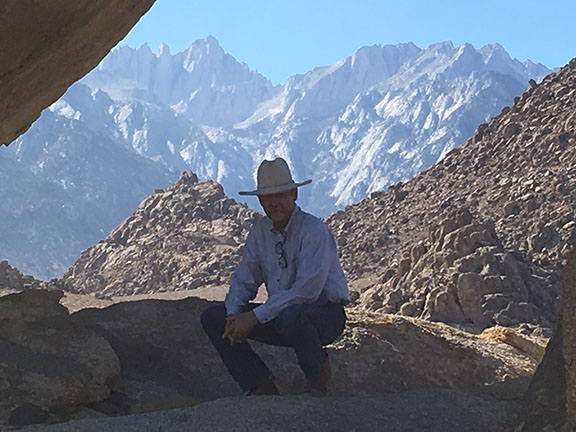 Better composition but not quite as dynamic.

After our class photos were taken we retired to a sprawling home on the edge of the Hills and had a delightful brunch. 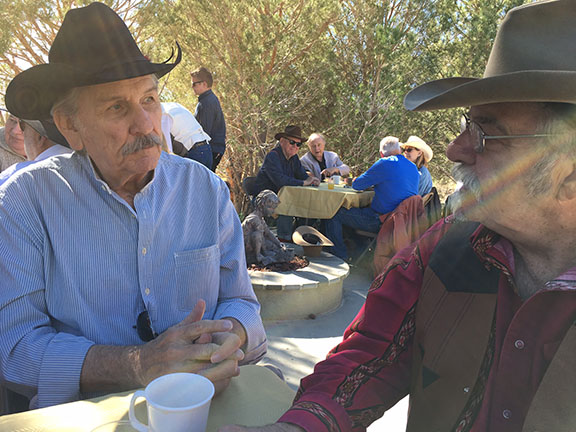 One of our hosts, Packy Smith, at left, and Larry Floyd,
of the Williamsburg Film Festival, at right.

After the brunch we went back to Main Street to ride in the Lone Pine Film Festival Parade. I was thrilled to ride in a cherry Lincoln Continental: Before the parade I was asked if I wanted to do a guest spot on a radio broadcast and we walked across the street to a typical radio tent, with open sides, the kind of setup I have done numerous "remotes" from, back in the day. I looked around for the equipment and there wasn't any, I looked around for the satellite truck and there wasn't one. The radio guy did the entire interview on HIS PHONE! The DJ told me the quality of the mic is so good, they don't need all that old school equipment any more. Yikes. There goes 25 jobs and a slew of equipment that is no longer needed. Actually, it's probably closer to 100 jobs if you factor in all the manufacturing, etc.

Tonight is the closing ceremonies with a dinner down at Boulder Creek, one of the sponsors. I learned a lot about the history of the area and also about filmmaking. It's been a ton of fun and I definitely plan on coming back.

"Education is hanging around until you've caught on."
—Robert Frost