October 19, 2016
I'm developing a new feature for True West in 2017. Since so many classic Westerns were filmed over a half century ago, it seems like a good time to go behind the scenes and document how they were made.

When I was recently in Lone Pine, California for the Lone Pine Film Festival, I got a tour of the Alabama Hills with stunt rider and horsewoman, Sylvia Durando, who doubled for the female lead in the Randolph Scott classic Western "Commanche Station" (1960).

The movie opens with an 11-minute-montage-setup with very little dialogue. A loner, Jefferson Cody (Randolph Scott) is moving through the desert landscape with a pack mule. He is soon surrounded by Commanches who he hopes will want the bounty he is packing on the back of his mule. They actually don't and take him to their chief, and after Scott throws in his Winchester, the Commanches trade the goods for a captive white woman, Nancy Lowe (Nancy Gates), they have been holding. He puts her on the pack mule and the two ride quickly out of the stronghold and make their way towards Lordsburg, and safety. Their flight makes up the heart of the story. Sylvia Durando doubled for the female lead, Nancy Gates, and here we see Sylvia, doubling for Gates, riding through the Alabama Hills in August of 1959 when the movie was filmed.

When I mentioned that the rider looks younger than Randolph Scott in this sequence, Sylvia replied, "Yes, that is Hal Needham, he was the double for Randolph Scott in the long shots. He also doubled Richard Boon in Have Gun Will Travel, and I worked with him for nine months on that series.  Look close at his horse, above, and you will notice he is also a stunt double as well. He he."

Sylvia also had this to say about the riding gear, "The mule did not have a bit in her mouth, just a halter with a frayed rope so I asked for a wire or light reins be attached to the halter just in case the rope were to break or if the rope should get dropped. The wrangler fixed it up for me. I was sitting upon a packed pack saddle, no stirrups for my feet and only the wooden forks of the pack saddle to hang on to."

Here is a still from the movie that shows Sylvia full face to the camera. Evidently the PR department thought she looked enough like the star that no one would notice: 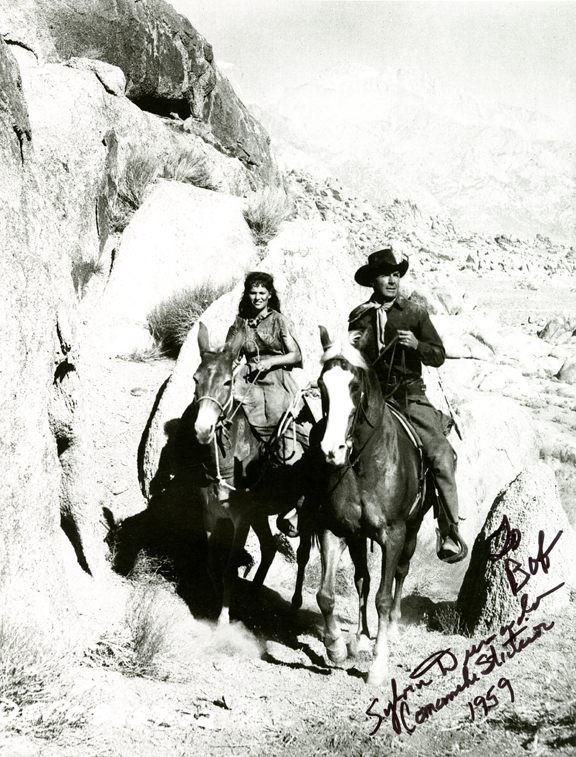 Sylvia Durando and Randolph Scott in a still from "Commanche Station"

And here's another shot of Sylvia on location taken just before the water trough sequence: 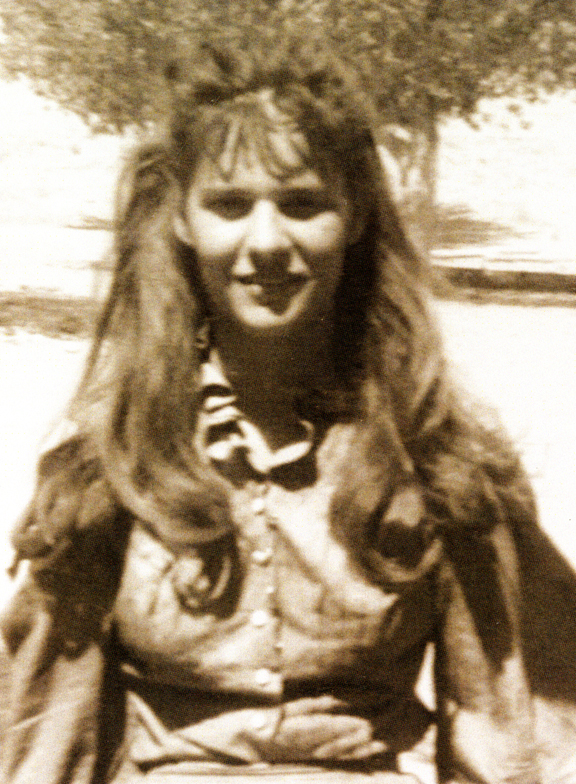 Sylvia Durando in the Alabama Hills, 1959

And here is the female lead, Nancy Gates, when she is thrown down on top of the trinkets Randolph Scott brought to trade with the Commanches. 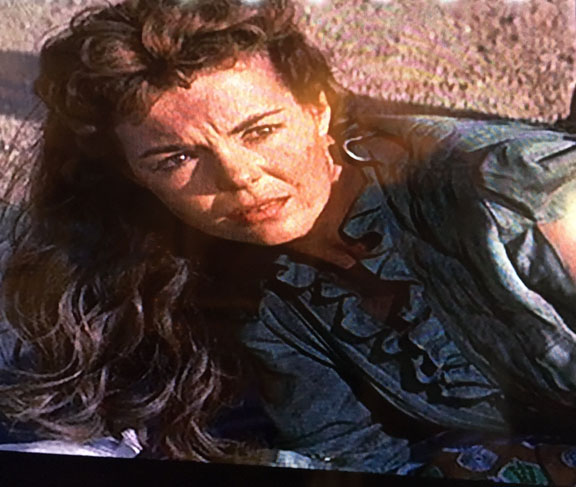 Nancy Gates as the Commanche captive. 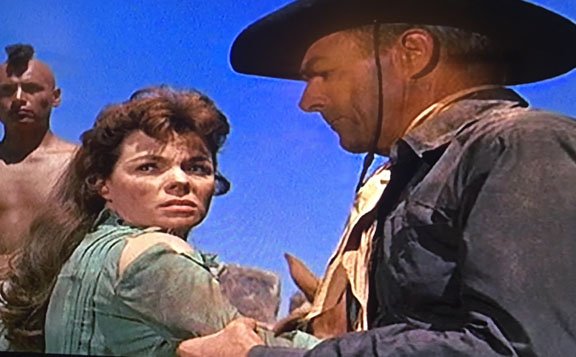 Sylvia also doubled Gates in the water trough scene when Scott throws her in the trough to save her from the rain of bullets pouring into Commanche Station. The script was written by Burt Kennedy and was his last script before becoming a director himself. 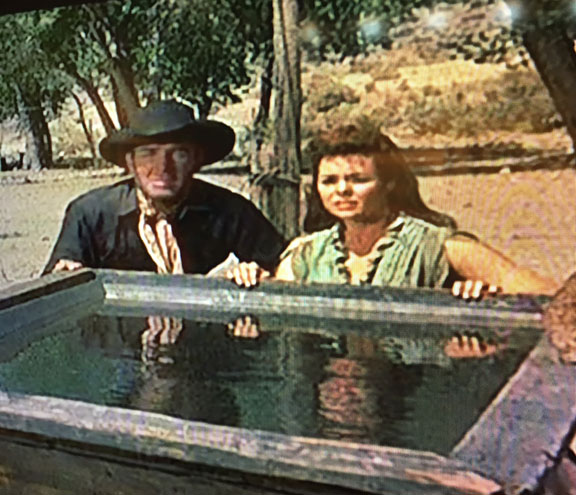 Scott and Gates in the water trough scene.

Sylvia describes the setup: "I was tossed into the water several times by Hal Needham (Randolph Scott's double) for the long shots and once by Randolph for the close shot. He picked me up facing the water and tossed me, I didn't go all the way in and my legs were on the end of the trough so for the sake of avoiding a cut in the scene, Randolph Scott grabbed my feet and shoved, scraping my chins on the wood edge of the trough. They got the close up in one shot!" 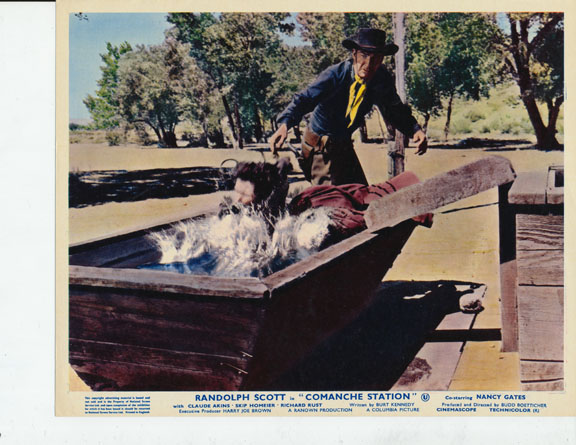 Sylvia added, "The lobby card is me in the water, had it been Nancy Gates the face would not of been hidden. I don't recall her ever being tossed into the water, they just cut and she got into the trough. I was in it the whole time they were filming the battle. I would duck and then come up for air than duck again. The crew let me do that about five more time after the cameras stopped rolling and they were all laughing at me ducking and diving. I was paid an extra seventy five dollars overtime for all the times I got tossed that day!"

It was a thrill to see these sites with Sylvia who knew all the behind-the-scenes stories on the last Western Randolph Scott made in the Lone Pine area. 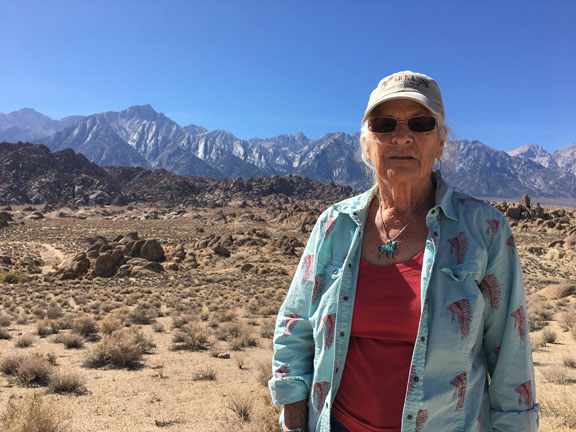 Sylvia Durando at the scene of the filming of Commanche Station this October 7, 2016. Today she is 82-years-young and is still riding horses and mules. Quite a Western gal, she is.

When I asked Sylvia how we can tell if it's her riding the mule in the film, she said, "If she isn't bouncing, that's me."