The Big Killing: How Billy the Kid Became The Most Famous Man In New Mexico

We taped another YouTube History video today. I often type out my talking points here on Blogger.com because it gives me a crib sheet, in lieu of a teleprompter. Some of the narration I know by heart, but if there are lists of names or specfic quotes, it helps to have this cheat sheet. We record these shows on my computer camera which appears just above this text. Get it? Hence a few of my notes.

Fire is lapping at the last room where ten desperate men wait for their chance to escape. The defenders are crowded into a crumbling, small space. The walls are too hot to touch and ooze acrid smoke. The men are blackened, tired, thirsty and desperate. "Billy Peers Out From The Kitchen

of The Burning McSween House"

At approximately nine p.m. five of the men jump into the back yard and make stealthily for the east gate. Four of Peppin's men spot them and open fire, killing law student Harvey Morris in the gate.

The fourth in line of the first group, Henry McCarty, alias Billy Bonney leaps over the dying body of Harry Morse and returns fire. As the Peppin men duck, the rest make it out the gate and into the river bottom behind the McSween house. 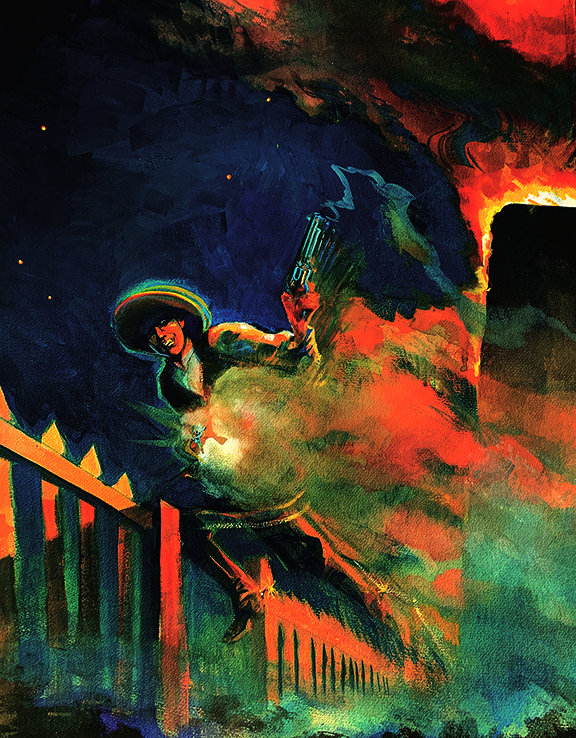 Rival posses have been zig- zagging across the New Mexico badlands, bent on killing anyone from the other side. As the Las Vegas Optic aptly puts it,

". . .both parties are in the field and a collision is imminent. If they should succeed in completely destroying each other the result would be hailed by all good citizens."

It started with an insurance policy and the killing of the Englishman, John Tunstall by a rogue element of a legitimate posse. This was in February of 1878 and this started the Lincoln County War and now, mere months later, it has come to a head in the small village of Lincoln, New Mexico.

Tired of running, Alexander McSween has decided to make a stand in his sprawling adobe home in the center of Lincoln. He has brought with him "about 40 of his hired fighters, the so-called Regulators. including Billy the Kid. They are led by Martin Chavez, a prominent native from Picacho. They prepare for a siege, barricading windows, piling bags of dirt against doorways and carve potholes in the adobe wall. Chavez places his fighters in all the key locations except for one. The torreon is controlled by the Dolan-Peppin men and so McSween the lawyer sends a note to Captain Baca whose house is next door to the torreon: "Sir, I want you to vacate the property now occupied by you at once. Unless you leave the house within three days, proceedings will be instituted against you without further notice."

Baca panics (his wife just had a baby) and he sends an appeal to Col. Dudley at Fort Stanton which is 9 miles west of Lincoln. Dudley's hands are tied because just last month, President Rutherford B. Hayes signed into law the "Posse Comitatus" act which states that the federal government cannot send U.S. Army troops to meddle in domestic affairs. So, instead of sending troops, Dudley sends the post surgeon Dr. Appel to investigate. While the doctor talks to both sides, Sheriff Peppin orders a deputy Long to serve warrants on McSween and his men and demand that they give themselves into custody. As the deputy approaches McSween's house he is fired on and runs for his life. Around dusk Peppin's reinforcements arrive from the west yelling and shooting. A witness claims "about 100 shots fired."

Both sides exchange shots most the next day and frustrated that he can't dislodge McSween and his men, Peppin sends a message to Dudley asking to borrow a howitzer to blow them out. Dudley declines but sends his regrets with a black trooper, Private Berry Robinson, who is fired on as he enters Lincoln.

Hearing of the firing on one of his troopers, Dudley sends a gaggle of officers to Lincoln to investigate. After more shooting and posturing, three Mexican women allegedly walk to Fort Stanton and plead with Dudley to help them repossess their homes. Dudley meets with his officers and they sign a resolution supporting Dudley's decision to "place soldiers in Lincoln for the preservation of the lives of women and children."

The men in the McSween fortress have been housebound for four days, going on five. Hygiene and toiletry needs are reaching the critical point.

"Dear Ash—"please send me $3 in stamps. I am O.K. I suppose you hear queer versions. Right will triumph."

Both sides stop to read their mail.

Dudley arrives around noon with four officers, one company of cavalry and one of infantry, a total of 35 men. He also bring a 12-pound howitzer, a Gatling gun with 2,000 rounds of ammunition and three days rations.

Some nine hours later, the Kid jumps out of the McSween house, through the gate, and into history. 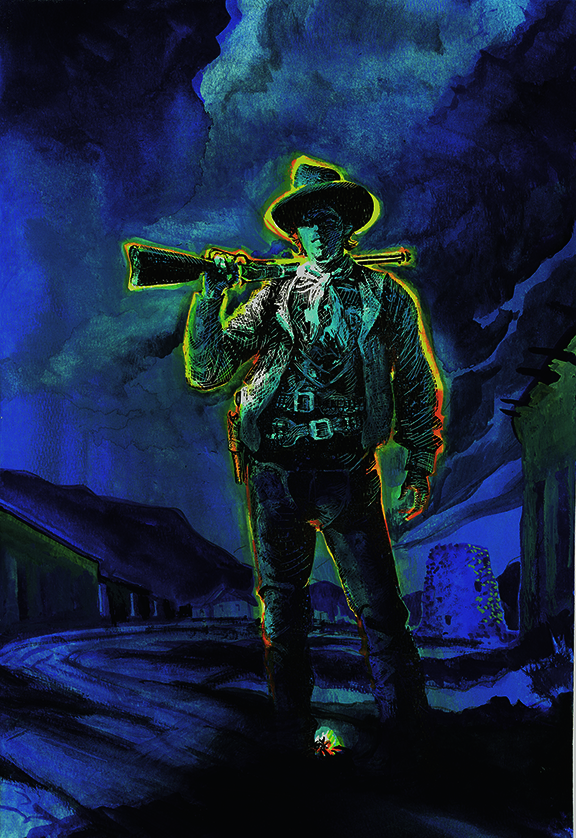 So, This Is How Billy The Kid Survived

It is the first defining moment in the Kid's short and dramatic life. When Billy Bonney jumped out of that burning house, he became the most famous man in New Mexico. Three years later, and just down the road, he would once again buck all the odds and with that escape he became one of the most famous outlaws in American history. But that's another story, for another day.

"I'm Bob Boze Bell and this has been a True West Moment."

—My old catch phrase on The Westerns Channel