Although we were encouraged to do sketchbooks when I attended the University of Arizona Art College, I rarely did. I did do fits and starts of sketchbooks, like these two pages from my Honkytonk Sue clip file/sketchbook:

From time to time I would go to life drawing classes and sketch at the bars where I played drums:

I went to work for New Times Weekly in Phoenix in 1978 and did some actual sketches in court. This is from an infamous case of a notorious bigamist:

He was a greasy kind of guy and it was hard to believe he bilked so many women:

I also managed to capture a family scene, or two, like this one, drawn three days after the above court sketches. This one is of Kathy's grandmother, Jennie, sketched just before the birth of Thomas Charles Bell:

In 1989, The Jones Boze & Jeanne Radio Show adopted the new Phoenix Cardinals (they had just decamped from Saint Louis to Phoenix) and we created a group of crazy fans called The End Zonies (David K. came up with the name). I drew a series of sketches, and one of them ended up as the logo:


End Zonies sketches, Sept. 5, 1989: we chose the one of the cow skull with the goalpost horns

It wasn't until I took up cartoonist Dave Sim's inspired challenge (every artist has 10,000 bad drawings in him) of commiting to doing 10,000 bad drawings that I got into the habit of drawing every day. Since that time (2006) I have compiled a significant pile of sketchbooks, which Curator Cal had to find in my messy studio and put in a safe place:

But back to my notes from the most current sketchbook: Here's a note from October 18:

"There is a valid reason for my success and my failures. My limitations seem to be endless, but my possibilities stretch even farther. To keep trying is my MO—to get past the stops, the lethargy, the procrastination, and ultimately, the fear. It's always about the fear."

Poached jokes: "There are many reasons we broke up. There was a religious difference. I'm a Catholic and she's the devil."
—Adam Ferrara

Harsh Verdicts: "my book signing at Changing Hands was a total bust. Paid $300 for the privlege of selling maybe five books. Some assholes came in the room during my talk and started laughing and playing some board game!"

Flat Out Self Flagellation: "You are a mediocre artist and nobody reads your blog!"

Overheard Criticism: "He's too cartoony." The reaction to a member of the Cowboy Artists of America who recommened me as a member. 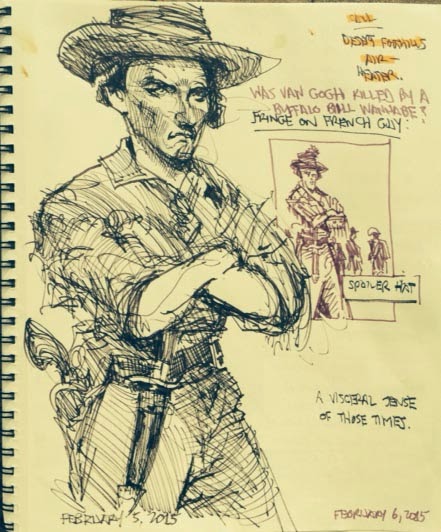 
Amazing Insights: "Our history is an aggregate of last moments."
—Thomas Pynchon

My Top Ten Fears
1. Failure
2. Dying alone
3. Blowing it (fear of redundancy, see number one)
4. Foreign train schedules (strange situations like the one we had in Paris in a tunnel)
5. Freeway phobia
6. Media rejection (see number one)
7. Alcoholism (my father was an alcoholic and my mother warned me every day that I was next)
8. Cancer (after the age of 62 your chances of getting cancer are 50%)
9. Crazy drivers
10 Deer death (a deer jumped into my windshield coming back from a speech in Payson)
11. Being stupid (see previous ten fears)

Oddest Answer: I'm in Thailand talking to a guy named Surge. We are alone at breakfast in a B&B by the river at six in the morning and not even the kitchen staff is up yet, so I ask him about the king, a no-no we were told to avoid at all costs. He tells me about his love for the king and the entire family. I say, to be polite, "You like history," and he replies, "Yes, but not in the past."

I Wish I Had Thought of That: the nickname for the selfie stick is "the wand of narcissism."

Just to show I never seem to grow up, or give up, after all my recent attempts to capture the Frank Stilwell killing by Wyatt Earp and Doc Holliday, to be featured in the next issue of True West, here is a page from almost exactly ten years ago:

Cool Titles: I'm always looking for cool titles to books, articles and blog posts. Here are a few from this sketchbook: Coot, The Codger (when you pass 30, you take your first steps towards weary wisdom), Kid Krazy (me and my insane friends who dig Billy the Kid), Bisti Bad Man, Down & Dirty, Red Ghost, Wyatt Earp In Hollywood: The Untold Story, A Special Place In Hell, The Heatwave, The Luck of Billy the Kid, Muy Mexicano, Loveless (a lonely cowboy in Burro Creek Canyon named Johnny Loveless, actually the subject of a book, great name), The Gunfights of Billy the Kid, Eternal Anger at The O.K. Corral, Hi Jolly, Dude, The Dude, The Ball (Matisse's wfie's nickname), Six Skirts of Modesty (Navajo women sometimes wear "six skirts" as a show of modesty and no doubt six layers to get past for drunk and horny accosters), Shine Smith, Red Lake, Fifty Shades of Spray (a blog post header about the use of "bum guns" in Thai bathrooms), Sticky Falls, Honest Injun (so un-PC it may work), Cowgirl Supreme (Sandra Day), Rattlesnake Kate, The Legend of Apache Grove, The Lecturer From Hell.

My fave quote from the sketchbook:

"You can't really make fun of something unless you truly, deeply madly love it."
—Mel Brooks